This month’s inspiration comes from author Shaun Jeffrey. He’s been publishing short stories and novels for years, and his latest novel is now a movie!

So, without further ado, the following page is Shaun’s stage…

The old adage goes ‘Write about what you know’, but in the case of monsters and serial killers, that’s easier said than done. Now, although monsters are figments of the imagination, serial killers are rea – but how can you write about killing people if you’ve never done it? This was my problem when I wrote The Kult. OK, aside from risking imprisonment and actually going out and killing people, which I’m not going to admit to in public, you have to make shit up. You have to let your imagination run riot.

When I started writing the novel, I set out to write something that I’d like to read, but sadly, at first it didn’t work out that way, and the novel I wrote was nothing like the novel that was published. 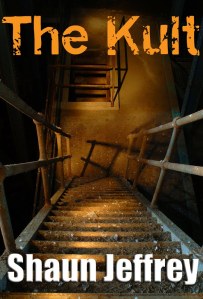 The story started out about a group of mutated individuals seeking revenge for the continual harassment they suffered at the hands of others. I finished the novel, landed an agent and then waited for it to sell. And I waited, and I waited. But nothing happened. A publisher expressed an interest, but then nothing came of it. So in the cold light of day, I reviewed what I had written and realised that I didn’t like it at all. To cut a long story short, the agent and I parted company, but I knew there was something in the novel that I liked, so I went over it again, and realised that there was another story there, a much better story that needed telling. So I rewrote it, and as I did so, the story flowed. It was as though it had been there all along, but I had tried to shape it into what I wanted it to be, rather than letting the story be what it wanted to be. Once I had finished, I was much happier about the whole thing and the new novel was nothing like the original apart from containing a few of the same characters. Next thing, I knew I had sold it to a small press publisher (who has sadly since gone bankrupt, but the book is available in various ebook formats) and then, before long, the book was optioned for film. Shooting finished last year and the first trailer has just gone online.

So it’s not always about what inspired you to write the story as much as it is about the story wanting to be written, and that’s something you have little or no control over. Of course when you’re writing about a subject that you know little about, such as when I wrote, The Kult, you have to research. My study involved reading about heinous crimes and the mindset of killers so I could ‘walk in their shoes’ so to speak. Because of course I’d never really kill anyone, unlike the characters in my novel …