A Visit To The Asylum

It looks like a lot of potential inmates are hooked on Asylum Scrawls, my first short story collection packed with 6 original stories and a bonus story by Norm Hendricks. It was truly a labor of sick, sick love.

The feedback on one of my stories, Stoned, has been tremendous. Author Russell James said, “Stoned is one of the best bits of horror I’ve read in a while.” I promise, I didn’t pay Russ a dime for that.

As my way to give thanks (see how I tied that in to the upcomnig holiday? Nifty), I thought I’d give you a preview of Stoned. If you’re hooked, come on over to Amazon and take Asylum Scrawls home for only $1.99. As Alfred E. Neuman would say, “Still cheap!”

OK, take a hit of thorazine, slip on that straightjacket and close your eyes as you travel to rural South Carolina. The sun is high in the summer sky, and the pummel stone sits waiting for today’s lesson….

The smooth surface of the Pummel Stone was ice cold against Kitty’s bare breasts and stomach, and despite the burning slash of the belt on her back and the fevered friction of Ed’s fingers as they worked in and out of her pussy like a trio of funny car pistons, it felt somewhat soothing out here in the blazing South Carolina sun.

God she hated South Carolina. She’d made it out once, all the way to Wyoming. Now there was a place where you didn’t feel like dying come summer, where the heat of the day didn’t hit you like a wet towel fresh from a pot of boiling water.  If there was one thing she hated, it was the damn heat and humidity of the deep and nasty south.

He hit her again with the belt. This time, she felt her skin split. When she tried to move away he dropped the belt and used his free hand to grip the back of her neck, pushing her face harder into the rock.

“Where do you think you’re goin’?” he hissed in her ear. His tongue was thick with cheap beer and his breath reeked of day old diapers. “That’s right, bitch. You ain’t leavin’ the Stone until I’m finished up in here.”

Ed’s favorite blasted from the speakers he’d had installed under their covered patio: Entrance of the Gods into Valhalla by Wagner. Lord in heaven did she hate that song. Ed had gotten hooked on Wagner after watching Apocalypse Now one too many times, what with the helicopters and all the bombing and that horrid music blaring in the background. He went out to the music store one day and shuffled through the Nice Price CD box until he found a copy of selected works by Richard Crazy Ass Wagner. There wasn’t much call for regular priced classical CDs in these parts. Kitty thought if the dead composer could see what his music had inspired, he’d approve. All men were bastards that way. Goddamn heathens. 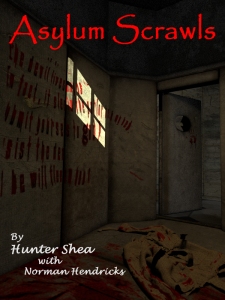 “Hidey-ho, in we go!” Ed shouted, and before she knew it, he was full up inside her, well, at least as far as his needle dick could go. Amazing how much damage that little pecker could do when she wasn’t properly greased. He grunted and rutted like a sick hog. She hitched slightly when his sweat splashed into the wounds on her back.

Thankfully, it was over almost as soon as it had started.  He pulled out and away from her in one staggering motion. She slumped down to the base of the stone, resting her cheek against it, willing her tears away.

“Hey, you want me to help you inside?” He was a different person now, all that beastly rage seeping out of him with his semen and into her. He sounded apologetic, which meant she must be bleeding a lot. Ed always got that way when the blood was bad.

“Just…go…away,” she said without opening her eyes. She didn’t want to see his face or his limp dick crawling back into its shell or the belt on the floor or her torn clothes thrown in a pile by the back door. Because Ed killed her baby once upon a fucked up time and she knew for sure he didn’t have the guts to kill her. The only constant in her life was the Pummel Stone and no matter how far she ran or who she ran to, it would always be there, waiting for her.

Okay, it had always been like this, at least as far as she could remember, and probably always would. But damn, Kitty was for-shit-sure that if her ma hadn’t hanged herself from the tree that used to be in the front of the house, that was before her daddy tore the whole thing up, roots and all a week after the funeral, things would have been different. Momma was her protector, and Lord knows she needed protectin’. Her daddy was a ruthless old bastard, penniless, godless and brainless. One of her first memories was seeing him whup on her momma against The Stone. He was hollering at her something fierce and whacking at her with his boot, but ma didn’t make a sound. She took it like the man he could never be and that just made him crazier.

Well, after ma died the old man gave The Stone a rest. It was just the two of them now and little Kitty at age seven had to quit school and take care of him and the house. One day the vice principal came to the house to insist Daddy put her back in school. He didn’t even have two sentences out before he was face to face with the wrong end of a shotgun and tearing ass back to his car.

Life sucked worse than a piglet on a teat, but it was about to get worse. When she turned twelve, a timer went off Daddy’s twisted head, like one of those little plastic poppers they put in chickens to tell you when they’re done roasting.  Now it was her turn to lay against the Pummel Stone and get her deservins. No infraction was too small for The Stone. That big piece of rock that jutted up in their yard, slate gray and ugly as sin, so damn big they couldn’t even dynamite the thing out, it was kind of the family heirloom. The farm had been in their family for three generations and The Stone right along with it. Turned out, punishing the family for their sins, be they real or imagined, was also a family tradition. Her daddy had told her once that his granddaddy had named it the Pummel Stone, on account of anyone put face to face with the rock was about to get a pummelin’. Except if you were a girl you’d get that and more and Daddy carried that torch with flying colors.

Kitty endured her father’s cruelty until she was eighteen, always staying as quiet as her ma because she knew it drove him crazy.  She hoped the bastard would have a stroke but of course he never did. When she turned eighteen she stole out of the house one night and took a bus to Florida.

She spent the next seven years traveling all over from one crappy job and run-down town to another, leaving in her wake a string of ex-boyfriends as useless and mean as the old man. When a girlfriend once asked, “How do these men find you?” after her latest broke her nose, she realized, They ain’t finding me. I’m finding them.

Things changed when she met Ed Blake. He was fresh from the Army and as good looking as a movie star. They met in Troutville, Virginia when she was waiting tables at a truck stop diner. He was smart and sweet and romantic and before she knew it they were happily married and living like a couple of lovebirds.

Then word came from her Aunt Mary that Daddy was dying. Kitty would have been happy to let him die alone but Ed said it was important for her to be there, no matter how bad a man he may have been in the past. That was Ed back then, kinder than a saint and a sight better looking to boot. So off they went to South Carolina, back to the farm and the round patch of brown grass in the front yard where the big dogwood tree used to be.

Daddy was real bad with cancer. She was torn between wanting to hold in her piss and save it for his grave or washing his withered face with a soothing, damp cloth, telling him everything would be all right. It took him a month to die and in that time he responded mostly to Ed. She spied them several times, Ed’s ear close to her daddy’s lips, his words too feeble to carry into the hallway.

Well, the old monster finally died and Kitty surprised herself by crying at the funeral. The house was left to her and Ed insisted they stay. A whole farm, even though it hadn’t produced anything in years, was better than a one-bedroom apartment in Troutville. So they stayed.

And wouldn’t you know it, a year to the day later she found herself back on The Pummel Stone. Ed had taken to drinking on account of not being able to find work. Men were like that. The moment they felt emasculated, in came the booze. One day, decided to give her a spanking against The Stone because she burned their supper. Things progressed, or in this case, regressed, and she wondered just what the hell her father had been feeding Ed while he lay there dying. But then she realized it probably had nothing to do with him.

It was the Stone. It possessed every man who lived by it and damned every woman unlucky enough to be with the abuse-loving fucktard.

Find out what happens to poor, hapless Kitty, as well as the fate of a recent amputee being plagued by his old toys, two couples faced with a ghost that will not leave or speak and six young boys stuck between a sewer creature and the Son of Sam at Asylum Scrawls, only available on Amazon.

7 responses to “A Visit To The Asylum”