A Summer of Full Time Writing

I have something important to report – bucking the system and pursuing your passion does not bring the world crashing down around your head! The rewards of doing what you love are immeasurable.

Well, I’m 2 months in to this whole full time writing thing and we’re not living in a cardboard box. The one strange thing is this : despite having all day to write, I still feel like there’s not enough time! It could be because I’ve taken on a ton of projects to work on. Every day is filled with both writing new material and editing. I’m certainly not spending my time watching daytime TV. I do wish I’d caught more Jerry Springer. An hour break to revel in humanity at its worst can’t hurt, can it? 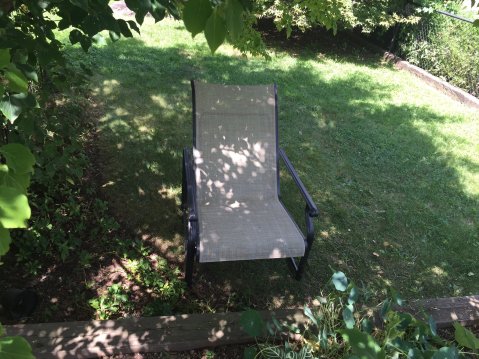 My new office. Instead of an admin assistant, I have a squirrel that’s always in the branches above me. Hope he’s not stealing my ideas!

But here’s the thing – I go to bed every night feeling as if I haven’t worked at all. Because it’s not work. It’s what I want to do. The only weird part to get over was this ingrained guilt at not being in a cubicle and miserable. We’re so used to this as the status quo that it takes time to detoxify.

“Twenty years from now you will be more disappointed by the things that you didn’t do than by the ones you did do. So throw off the bowlines. Sail away from the safe harbor. Catch the trade winds in your sails. Explore. Dream. Discover.” ~ Mark Twain

So, what have I accomplished? I finished my next novella for Severed Press, LOCH NESS REVENGE. It’s with my beta readers now and will be delivered to my publisher this month. Expect an October release. I’ve also started a new book for Severed set in a lost world packed full of cryptid madness. It’s pure nuttiness and fun.

A month back I mentioned I was working on a series of 3 novelettes for an undisclosed publisher. Well, I still can’t make the official announcement, but the first novelette is all done. I’ll start the second this month. They’re going to be set in the 70s and 80s and have something to do with comic books. That’s all I can reveal for now.

I also finished the book I started last October, WE ARE ALWAYS WATCHING. It’s with beta readers now and will also be sent to my new publisher (another announcement I’ll be able to make soon) in early September. I heard that it’s going to be out in January, 2017.

Feeling like I wanted to branch out a bit, I wrote 2 children’s picture books. They’re with my agent now. Cross your fingers.

You’ll also be seeing writing tips and advice from the Shea trenches on THE VERBS blog this month. I hope to be a continuing contributor.

Now, here’s a brand new project that I think you’ll dig. I’m going to release a series of short stories called HUNTER SHEA’S FAST FRIGHTS. I’m shooting for a new story every month, priced at just 99 cents. The first story, an alien abduction tale, will be released in September. I’m tidying things up and artist Mike Chella is tweaking the cover art. FAST FRIGHTS will be quick hits of horror, a dose of what you need the most. Stay tuned for more about them because you, the readers, will be involved in the creative process as we move along.

“The writer walks out of his workroom in a daze. He wants a drink. He needs it. It happens to be a fact that nearly every writer of fiction in the world drinks more whisky than is good for him. He does it to give himself faith hope and courage. A person is a fool to become a writer. His only compensation is absolute freedom. He has no master except his own soul and that I am sure is why he does it.” — Roald Dahl

Other than that, I’ve spent a lot of time with my family, which has been fantastic. My oldest daughter passed her road test, so I now have someone who can save me from making every run to the supermarket! Daughter number two gets all my attention now to prepare for her road test. Oy! We’re also getting things in line so my wife can have some major surgery. She’s having double knee replacement. I expect a lot of cursing when it comes time for rehab. She asked one doctor, “Will I be able to run once it all heals?” He said, “Were you able to run before they went bad?” She shook her head. “No.” To which he replied, “Well, then, no.”

I’m working with my local Barnes & Noble and library to help new writers by offering any kind of assistance they need. Always, always give back to others. It can’t all be about you, no matter what you do. I remember what it was like when I started out with no one around to lend me a hand. I would have given both legs for a published author’s guidance.

Having time to read, really read, has been a godsend. I surpassed my GoodReads reading challenge of 70 books for the year. Some books I truly enjoyed were Island Red by Matt Serafini, Go Givers Sell More by Bob Burg and John David Mann, Robert Parker’s Kickback by Ace Atkins, Devil Red by Joe R Lansdale and A Living Grave by Robert Dunn.

As far as television and movies go, I absolutely loved Stranger Things on Netflix. I also really enjoyed Judd Apatow’s series, Love. In the movies, hands down, the best movie of the year is Hunt for the Wilderpeople. If you can find it near you, run and see it. It’s gotten a 100% on Rotten Tomatoes for good reason.

The good news is that all of this is inspiring me and giving me the room to deliver more for you than ever! Oh, and I’ve been gearing up for the release of The Jersey Devil on August 30th. You’ll be able to find the paperback in bookstores, supermarkets, Walmart and everywhere. Send me pics of where you find those devils and I’ll share them and give some shout outs!

2 responses to “A Summer of Full Time Writing”