Catherine Cavendish and her Fiendish Boggart!

I love handing the reins over to master horror author Catherine Cavendish because she brings it every single time! This is one you won’t want to miss. Okay, Cat, time to scare the hellions…

Boggarts. Devilish little creatures found in deep, dark woods in parts of the North of England. Their sole rajson d’etre appears to be to frighten, maim and kill humans – whom they call ‘forkypeds’.

It seems that while other, more southerly, folk cultures had their ‘house elfs’ who took care of things, homes and humans, the hardy northern folk were surrounded by much darker forces. Almost every home, it seemed, had its own boggart, out to cause mayhem and serious damage. 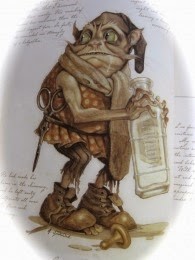 In Northumbria, there is a tradition that helpful spirits such as ‘silkies’ could turn bad, and when they did, they became boggarts. In Lancashire, boggarts were mostly evil to begin with. They were said to live outdoors, in holes in the ground, lurking there to trip the unwary, or in marshes, where they would suck unfortunate travellers underground. They would abduct children, kill and eat animals, creep into a house at night and place a cold, clammy hand over the sleeping inhabitants, spreading sickness with their touch.
One famous legend tells of the infamous Grizlehurst Boggart who made his first appearance (in print at least) in 1861, when an elderly Lancashire couple related his story. He was they said, buried at a crossroads nearby, under an ash tree, together with a cockerel. Yet, even though he was buried, he still caused much trouble. They said a farmer’s wife, known to them, had experienced doors banging in her house one evening. She heard raucous laughter, saw three candles burning, with a blue light which illuminated a grotesque figure with cloven hooves and flaming red eyes, as he leaped and danced around. The following morning, she found many tracks of cloven hooves outside her farmhouse.

The couple also maintained that their own horse had been unhitched inexplicably, and their cart overturned, on more than one occasion.

Then there is the infamous boggart of Boggart Hole Clough – yes he even had a place named after him! He lived in a hole outside until one particularly cold winter when he decided to move into a nearby farmhouse. There, he proceeded to cause all kinds of mischief and malicious mayhem.  He snatched the food from the children at table, dashing their bowls to the ground. He would tug curtains, and attack the children while they slept. Eventually, so harassed were the farmer and his family that they decided to move out. Unfortunately, that did no good. Once a boggart has made his home with you, he will travel with you. You’re stuck with him for life. When this became clear, the farmer and his family moved back into their old house. Naturally the boggart came too, but for some reason was never so malicious again.

It seems though that not all boggarts start out evil. I’ve mentioned the Northumbria ‘silkies’, but another tale – this time from Barcroft Hall, in Cliviger, near Burnley in Lancashire – tells of a boggart who started out as a helpful housekeeper. Very much on the lines of a house elf. The farmer’s wife would find all her chores done, laundry washed and ironed, floors swept. The farmer himself was grateful for the help he got bringing in the sheep on a snowy winter evening. He heard the creature’s voice, but never saw it. He was determined to rectify that and made a small hole in the ceiling of the room where the boggart performed most of his household tasks. Sure enough, his patience was rewarded by the sight of a small, wizened, barefoot old man who began to sweep the floor.

Surely his feet must be cold against the stone floor. The farmer thought so anyway and decided to make him a pair of tiny clogs and left them out for him. His son saw him pick them up and heard him call out:

T’hob Thurs will ne’er again do any good!”

From then on, the era of good works was over. The boggart began to hound and hurt his family. The animals got sick, the farmer’s prize bull was somehow transported to the farmhouse roof. Household items were smashed indiscriminately. Things got so bad that this family, too, felt forced to flee. But the boggart had other ideas. “Wait there while I fetch me clogs and I’ll come with thee.”

And this is why you should never give a gift to a boggart – for they cannot harm you unless, and until, you do.

Also, never be tempted to give a boggart a name. If you do, then be prepared for the full force of the boggart’s malice to be visited upon you.

In Lancashire and Yorkshire, there are many place names associated with boggarts. In addition to Boggart Hole Clough, you can find Boggart Bridge in Burnley – another Boggart Bridge can be found in Ogden, near Halifax (West Yorkshire). Then there’s Bee Hole Boggart. Burnley also boasts Sweet Clough Boggart and Barcroft Boggart. Rochdale has Clegg Hall Boggart, and Matlock boasts Standbark Boggart. Roads on a council estate in Leeds are prefixed with Boggart. In fact the estate itself is called Boggart Hill.

Boggarts answer to only one master.  Owd Hob – the archetypal devil with cloven hoofs, forked tail and horns.

How can you protect yourself from a boggart invasion? The best method is to place a horseshoe over your front door and a pile of salt outside your bedroom.

And just be careful when you’re walking over the moors and marshland of Lancashire and Yorkshire. The majestic, bleak beauty of the Pennines hides many mysteries – and there may just be a boggart or two lurking, unseen, ready to pounce.

There are plenty of sinister goings-on – and a terrifying some demon – in my novella, The Devil Inside Her. This is what to expect:

When nightmares become dreams, someone must die

Haunted by the death of her husband and only child, Elinor Gentry’s recurring nightmares have left her exhausted. She’s crippled by debt, and only the remnants of her former life surround her, things she can’t bear to sell, and wouldn’t make much profit from if she did. Then, for no apparent reason, the nightmares transform into pleasant dreams. Dreams that lead her to take back control of her life.

A string of horrific and unexplained suicides–and an unnerving discovery about Elinor herself—lead her best friend to seek help from the one person who has seen all this before, and things begin to spiral out of control. Hazel Messinger knows that Elinor’s newly found wellbeing is not what it seems, and Hazel’s not about to let the demon inside remain there permanently.

You can buy The Devil Inside Her here; 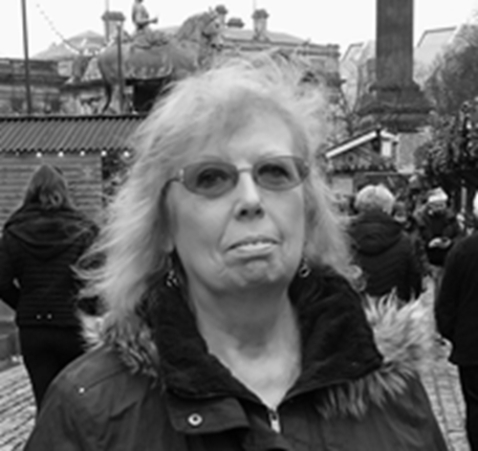 Following a varied career in sales, advertising and career guidance, Catherine Cavendish is now the full-time author of a number of paranormal, ghostly and Gothic horror novels, novellas and short stories. Cat’s novels include the Nemesis of the Gods trilogy – Wrath of the Ancients, Waking the Ancients and Damned by the Ancients, plus The Devil’s Serenade, The Pendle Curse and Saving Grace Devine.

Her novellas, Cold Revenge, Miss Abigail’s Room, The Demons of Cambian Street, The Devil Inside Her, and The Second Wife have now been released in new editions by Crossroad Press.

She lives with her long-suffering husband, and a black cat who has never forgotten that her species used to be worshipped in ancient Egypt. She sees no reason why that practice should not continue. Cat and her family divide their time between Liverpool and a 260-year-old haunted apartment in North Wales.

One response to “Catherine Cavendish and her Fiendish Boggart!”