Bio – All About Hunter

Hunter Shea is a lifelong horror hound and writer of over thirty books of monstrous mayhem, ghostly frights and newfound terrors. Some of his bestselling books include the critically acclaimed Creature, They Rise, and The Montauk Monster, the nostalgic Money Back Guaranteed series, and Jessica Backman’s Death in the Afterlife trilogy. His books have been found in the International Cryptozoology Museum and his face on the Discovery Channel where he talks about, well, monsters.

He can be heard and seen on his two long-running podcasts, Final Guys and Monster Men, both informed and humorous explorations of the best – and worst – movies, books, interviews with some of the hottest writers, directors and producers in modern horror, true life hauntings, UFOs and more.

A long-time columnist for Cemetery Dance Online, Hunter’s Video Visions is a look back at the days of video stores past.

He’s a father, husband, cat owner (aren’t all horror writers?), pizza and beer lover, battle-scarred Mets fan, and leader of Hunter’s Hellions, the greatest gaggle of lunatics on the planet. He lived with the ghost of a young boy for 25 years, was part of a mass UFO sighting in the 80s, and is still waiting for Bigfoot to show up in his yard. You can follow all of his travails at www.huntershea.com, and while you’re there, make sure to sign up for his Dark Hunter Newsletter where he highlights all the best the genre has to offer. 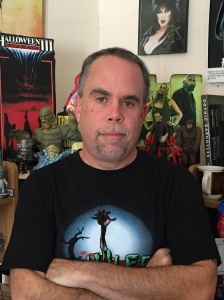 2 responses to “Bio – All About Hunter”