The Whaley House – The Most Haunted House in America

I recently had to go to San Diego on business and being the paranormal addict that I am, I made sure to carve out some time to visit some haunted spots around the city. I originally booked a ghost tour so I could get more bang for my buck, but on the day I was supposed to go, they cancelled the tour. Ghost deprivation didn’t sit well with me, and as I stormed off to find a place to eat, I stumbled upon one of San Diego’s most famous haunted locations : The Whaley House!

Imagine my surprise when I saw the sign outside the old storefront.

Here I was in Old Town (the best place on earth for great Mexican food), a stranger in a strange land with no ghostly tour van to take me around, and I just happen to find what is probably one of the top ten haunted locations in the country. Tacos could wait.

Now, I’m not going to go into the whole history of the Whaley House. You can get that right here. But briefly, it was built in 1857 when San Diego was a fledgling western town by Thomas Whaley. During it’s time, the old brick house was a mercantile, courthouse, playhouse, and site of public gallows as well the spot where criminal Yankee Jim Robinson was caught and hanged, with Thomas Whaley in attendance. And we can’t leave out that one of his daughter’s committed suicide on the property. It’s a location rife with sadness, extreme hopes and joy, bitter justice and broken dreams.

The ghosts that reportedly inhabit the house are numerous and even extend to dogs and cats. So, who are these unsettled spirits that roam the creaking floors? Let’s take a tour.

When you first walk in, you see the old mercantile counter, complete with antique goods.

On the counter you’ll find 2 books. One that outlines the history of the house and the Whaley family, and another that contains photos of supposed ghosts that have been taken by visitors over the years. More on that later.

Right next to it is the old courthouse. This is where a woman in white has been seen, as well as ethereal Native Americans and Confederate soldiers. Mind you, when I went, it was a sunny day and the house felt as benign as a house can be, but I could feel the weight of history around me. Any place with a rich past has a capacity to become a beacon for lost souls. 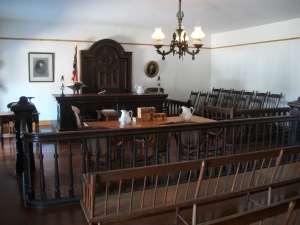 Next, I went upstairs. There have been numerous reports of visitors feeling like they’re being choked when they are on the ninth step. Could this be the presence of Yankee Jim, making sure folks feel the pain he experienced as he took his last breath? I will admit, the staircase was pretty eerie, even during the day. 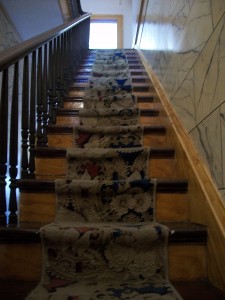 At the top of the stairs was the old playhouse, still set up like it’s ready for the next show to go on. The man who was responsible for creating this area died right after the first show. I was told by one of the docents that furniture on the stage has been moved, with chairs being swapped out and lecterns moving off the stage entirely. A young, new docent was in the room reading while I was in the theater and I asked her if she ever saw or heard anything odd. Just a couple of months into her employment, she said she hadn’t…yet. I got the feeling she wouldn’t mind a little otherwordly show to open on the stage. 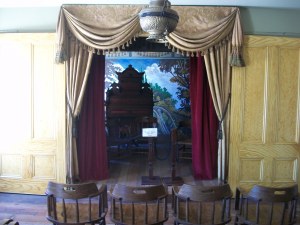 Next, I explored the various bedrooms where the spirits of the Whaley family, from Thomas to his wife, Anna, their children and a host of other unidentified wraiths have been seen. Many of the rooms have a plastic barrier that keeps people from going inside. That also means reflections off the surface can produce odd, but entirely natural phenomena. Notice the little dolls. For some reason, old toys give me the willies.

Then I came upon the parlor where Anna seems to spend a great deal of her time. This was one room that wasn’t blocked out, though you couldn’t walk inside. I can easily picture Anna sitting at the piano, playing a sad tune, mourning the loss of her children.

Exiting the house, I had to photograph the upstairs window where many people have seen a man staring out at them, and not always with a smile on his face. Many believe this is old Thomas, probably wondering why all these folks are tramping around his house.

Now, I will say that as a museum, The Whaley House is a must see. The historical society has done a good job keeping it in shape and the self guided tour was set up perfectly. You can take two minutes or two hours. It all depends on you. And it’s only a few bucks. You can’t beat that. You buy your tickets in the store right next door where you can pick up some Whaley House merchandise when you’re done.

I did speak to one of the more experienced docents and she was wonderful enough to go through the ghost photo book I mentioned earlier. She pointed out photos that were obviously nothing more than tricks of the light or camera lens, and others that were truly unexplained. She even took me to the spots in the house where the pictures were taken so I could get a clearer perspective and see how things could be misinterpreted or beyond doubt. I can’t thank her enough for the extra TLC.

Now for some odds and ends. If you book in advance, you can do a nighttime paranormal investigation. I wished I knew about that, but there’s always next time. As I was taking pictures, I noticed what I thought was a phantom face in this one –

Can’t you see it in within the upper right of the front facing wheel? Well, it turns out it was the sun reflecting off the mercantile counter, through the spokes and onto the wall. It only took 10 seconds to figure it out, but I wonder how many people would declare it a ghost photo without a second thought.

So, although I didn’t encounter anyone from the other side, I can cross this off my paranormal bucket list.  Like I said, book ahead of time and see if you can get into one of the night investigations.

I’ll leave you with this, possibly the creepiest thing I saw the entire day. Here’s a Whaley family member photo that will haunt you well into the night. Pleasant dreams! 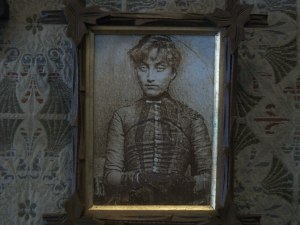 OK, I came, I saw, but I didn’t experience anything particularly spooky or paranormal. I know that tons of people have been there during the day and night. Have you? Has anyone had a ‘ghostly’ moment at the Whaley House? Come on and give us goosebumps!

In the mood for all things ghostly and horrific? Check out Evil Eternal and Forest of Shadows and get your goosebumps on.