The name of my book is CREATURE, and right now, Flame Tree Press is gathering a list of reviewers and bloggers to include on the extensive book tour. So, if you’re an established book reviewer (either on your own site, posting on other websites or print publications, or an Amazon verified reviewer) and want to be one of the lucky ones to get free advance reading copies and/or host an interview or article on your blog/print outlet, please reach out to me either here or email at huntershea1@gmail.com. I’ll make sure you get first crack at the book. 🙂

Here’s a little about CREATURE :

The monsters live inside of Kate Woodson. Chronic pain and a host of autoimmune diseases have robbed her of a normal, happy life. Her husband Andrew’s surprise of their dream Maine lake cottage for the summer is the gift of a lifetime. It’s beautiful, remote, idyllic, a place to heal.

But they are not alone. Something is in the woods, screeching in the darkness, banging on the house, leaving animals for dead.

Just like her body, Kate’s cottage becomes her prison. She and Andrew must fight to survive the creature that lurks in the dead of night

**Yes, I got my headshot to Flame Tree too late to make the press release. Oh well.

While I take a break to watch Mets Spring Training and continue my self-studies on ancient American archaeology, specifically the mound builders of North America, I’m handing this blog n’ chain over to author, Roland Yeomans. And talk about small worlds. His designer is Heather McCorkle, who is one of my favorite people in the Twitterverse! We are all 6 degrees of maple bacon. Roland’s latest book is a mix of horror and steampunk and history and everything in between. I can’t wait to read it.

OK Hellions, time for me to hit the textbooks. Roland, take the wheel…

“True horror is when men are free to become the monsters they have always wanted to be.” 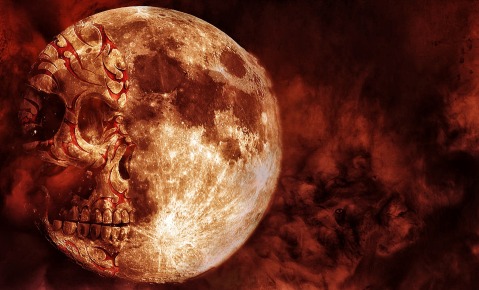 One of the worst war criminals was a home-grown one: General William Tecumseh Sherman of “Let’s Toast Marshmallows All Through Georgia” Fame.

It was his idea, by the way.

As he was drawing wagon-loads of civilian down roads suspected of containing mines, cannoning Atlanta homes sheltering crying women and children, and writing Secretary of War Edwin Stanton that there was a whole class of people, men, women, and children, that needed to be killed in the South.

The lure of alternate history is to take the past and give it a twist. Steampunk filters the story through a Victorian H. G. Wells lens. Horror allows me to serve back terror to those who most deserve it.

Have you ever thought what might have been the fate of the White Man had Native American magic been real, had the White’s boogey-men been waiting for the carnage of the Civil War to give them an engraved invitation? 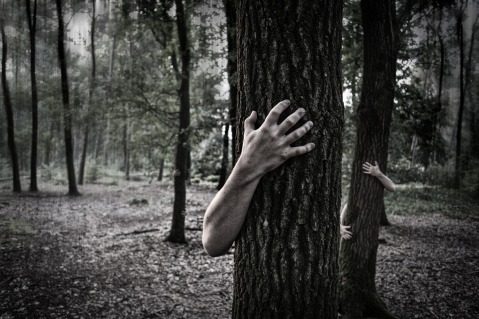 Imagine a world where aliens walk unsuspected among us, where global vampire kingdoms wage war against one another in secret, and one man with death in his veins tries to even the scales for those who cannot fight back. 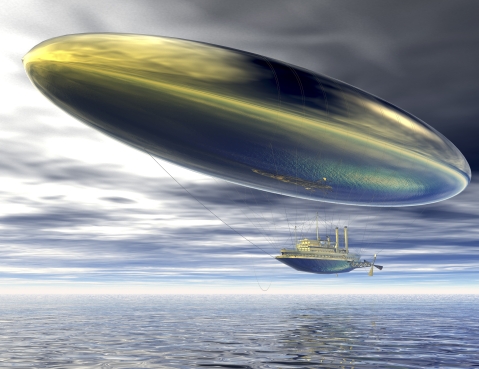 An atmosphere of unexplainable dread, of lurking unknown forces must be present. There must be a hint, expressed with a seriousness becoming its subject, of that most terrible conception of the human brain:a malign suspension of those fixed laws of Nature which are our only safeguard against the assaults of chaos and the demons of unsuspected reality.

In The Not-So-Innocents Abroad, Samuel McCord, a man cursed with the blood of the Angel of Death, marries the woman of most people’s nightmares: the Empress of the Alien Race that has toyed with Man since he crawled from out of his caves.

But love seldom has good sense, much less good luck.

Now, McCord must struggle to see if there is an honorable way to be married to a monster.

He may not live long enough to find there is no such road.

The vampiric Abigail Adams, Benjamin Franklin, and Empress Theodora of the Unholy Roman Empire are among the passengers of the honeymoon vessel of the no-longer human and the alien empress.

The insane Abraham Lincoln, Mark Twain, a crippled General Sherman, 11 year old Nikola Tesla, and the mysterious Greek physician Lucanus join many others on the honeymoon voyage of the first Air-Steamship, Xanadu. 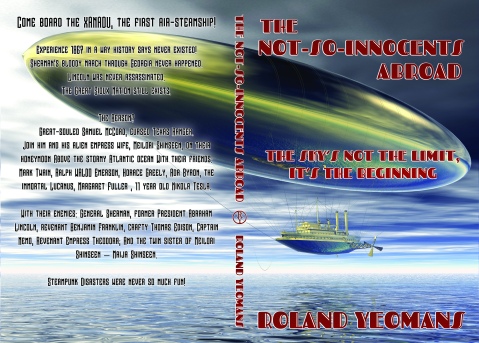 The keening which General Sherman heard as the Angel of Death convened at the corrupt peace treaty at Ft. Laramie when the skies became blood, the stars reversed their course, and the dead rose:

Cost of Passage? Only $9.99. Come aboard for the adventure of a lifetime.

Shady’s back from the mountains and lakes of Maine. It was nice to totally unplug for a whole week and just let my brain relax along with my body for a change. Every time I leave Maine, I leave a little piece of my soul.

Now that I’m getting into the swing of things, I have a couple of announcements (no worries, I’m not releasing any more books in 2014…don’t want Hunter Overload). 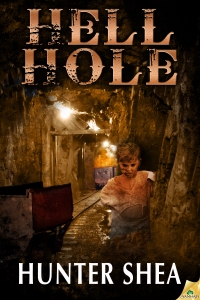 First, as you all know, my latest novel, HELL HOLE just came out earlier this month. It’s an insane mash-up of western and horror, the likes of which have never been seen before. If you would like to be part of the blog tour for HELL HOLE, reply to this post or email me at huntershea1@gmail.com. I’ll send you an e-copy of the book for review and will be happy to do a handful of guest posts and interviews. Hey, you’ll get a free book out of it! I hope to start the tour in late August, early September and roll until Halloween. If you know of a blog that fits the mold, let me know. There’s a reward for those who see something and say something.

Second, this Thursday I’ll be hosting my first ever Ask The Author Day. Hop on over to my Fan Page (link is on the sidebar) and feel free to ask me any questions about the writing biz, my least favorite zoo animal, how to spackle a ceiling, you name it. I’ll answer questions throughout the day and night. Should be fun.

Last but not least, if you’re on Goodreads, I’m giving away a signed copy of HELL HOLE to 1 lucky winner. Head on over there to enter.

Like the Blob, the tour for The Montauk Monster is loose and will keep on growing, terrorizing the citizens of our fine country and beyond all through the summer. And this time, there’s no young Steve McQueen to stop it!

I’ve been working hard getting posts and interviews together between binge watching the latest seasons of Game of Thrones (Khaleesi!!!) and Orange is the New Black (and now season 3 of my favorite show on TV, Longmire). I’m not a big TV guy but this time of year, they seem to cram all of my favorite shows on at the same time. Don’t they realize I have writing to do???

The Montauk Monster had a monster week in sales for week 1, and I hope we can make week 2 even bigger, thanks to the awesome peeps who have agreed to be gracious hosts for my tour.

Here are the 5 to kick things off. If all goes according to my evil plan, we may have dozens more taking us through the dog days of summer. Stop by all of the stops and discover some great writers and bloggers along the way!

June 12 – Keith Rommel (author of The Cursed Man, soon to be a major motion picture!)

June 24 – Back in Jack (you know him, my man from Amsterdam and co-host of the Monster Men podcast!)

A Sinister Tour This Way Comes

My tale of the mysterious doppelganger, Sinister Entity, keeps rolling along. I signed on to do a week long book tour this month, starting on May 20th. Here are the stops where you’ll find reviews, interviews and blog posts straight from my diseased mind. I’ll update the links on the SIGNINGS and APPEARANCES page during that week so you can get right to the ruptured heart of things.

Now this leg is nice and fat and juicy, enough to gnaw on until your bellies are ready to burst. The first part of the tour was a great success and Swamp Monster Massacre is kicking butt. Thank you to everyone who got a copy and/or reviewed it. The skunk apes and I couldn’t be happier. 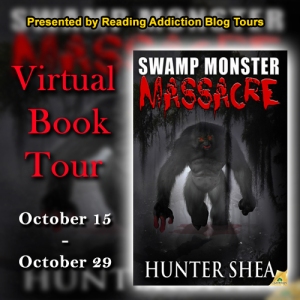 Also, don’t forget to follow my horror flick reviews (I watch at least one every day in October) by searching under #Terrortober on Twitter. And the Monster Men required horror reading list for Halloween is your one-stop-shop for Terrortober.

Now, grab your machete, bug spray and a full canteen and get swampy!

In just 4 days, my novella, Swamp Monster Massacre, emerges from the Everglades. In it, you’ll see why criminals, tourists and skunk apes don’t play well together. It will be available as an e-book through Samhain Horror. The Swamp Monster Blog Tour starts on the release day, Tuesday, October 2nd. The tour itself is going to have 4 (severed) legs and will run until the end of the year. We’re talking between 30 and 40 stops! 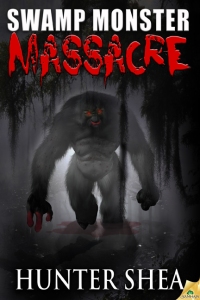 The first leg is all set to go, with posts, reviews and more importantly, giveaways. All along the tour, I’ll be giving away signed books, e-books, gift cards, signed stuff and more, so make sure to drop by each stop and enter to win. And pick up a copy of old Swampy or give him a Like. Gotta keep the monster happy. It’s under $3 everywhere e-books are sold.

I’ll announce the other (severed) legs here and keep checking the Signings & Appearances tab for updates to the tour.

We’re just days away from the global release of Evil Eternal (poor, poor world). Not one to sit on my duff, I’ve been hard at work at some other exciting things, but I’ll save that for a later post.

Below is the official Evil Eternal Blog Tour. Be sure to check in at each stop because there will be all kinds of freebies and signed books. 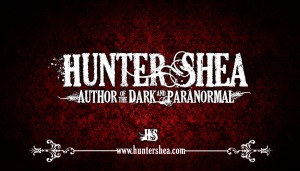 The book/blog tour is in full swing and sleep is something I hear other people talk about. I wanted to give you all an update on the various articles, interviews, what-have-you that are either live or coming up in the next few days.

First, I have a writing essay that discusses how much authors expose their inner selves in their work at Nicholas Kaufman’s blog. Nick is an amazing writer that should, and I hope one day will, get top billing with the Kings and Koontzs of the world.

Next up is an article revealing my deepest fear at Thomas Scopel’s Staying Scared way cool blog.

I’ll be popping in and out at the Samhain Cafe to answer any and all questions starting 10/3 and throughout the week. They host the cafe group at Yahoo, so just click on the name to join in the fun. You must be 18 to join, because Lord know what may come out of my mouth.

On Tuesday, 10/4, I’ll be interviewed on Artist First Radio at 7pm ET. Their interviews are usually an hour long and get down to the nitty gritty.

In the words of the immortal Porky Pig, th-th-th-that’s all folks…at least for today.