Bugging Out With TICKS

As a man who makes his stock-in-trade trade in creature features, I make it a point to watch as many monster flicks as possible. Somehow, I missed the 1993 horror/scifi romp, TICKS. That was the year my wife got seriously ill, so there are quite a few things that flew under my radar. Cut to years later and I always assumed I had watched it. Well, I hadn’t…until now.

I’ve had TICKS on my Amazon Prime watch list for a while now. If I had realized it was Ami Dolenz on the poster, I would have watched it sooner. The daughter of Monkee Mickey Dolenz, I crushed on her when she played a genie in the movie Miracle Beach.

If you’re looking for pure icky bug mayhem and some gooey gore, TICKS is for you. We start with a very young Seth Green being sent to one of those city kids goes to the woods camp. He meets a street thug who threatens to kill him if he doesn’t make a free throw. That gutter punk is none other than dancing Carlton, AKA Alfonso Ribeiro. It’s wig flipping to watch him play the tough kid who also sells dope on the side. They’re picked up in a van by couple Holly (played by Rosalind Allen, who I remember from the soap, Santa Barbara, but was also the marine biologist on Seinfeld) and Charles (Peter Scolari, from Newhart and Bosom Buddies – ever wonder how much he truly hates Tom Hanks?). Their sullen daughter is along for the trip and they’re joined by bad boy Ray, his main squeeze Dee Dee (Ami Dolenz) and a girl who never talks.

Oh, did I forget to mention that Clint Howard is a filthy redneck who has some insane contraption that pumps steroids into his marijuana plants? It looks like something the Little Rascals or Bugs Bunny would make, only less sturdy.

That weird goo is what drips on a tick and starts the whole shit storm. I always let out a little cheer when I see Clint in a movie. He’s this generation’s Dick Miller (RIP). The ticks pupate in these ooey-gooey egg sacks and when they pop out, they’re about the size of a man’s hand. Giant ticks skitter everywhere, latching onto faces and backs, crawling up pants and burrowing under rippling flesh.

This is all practical effects and it’s glorious. Be warned, a dog gets the tick treatment and he does not fare well. The third act is freaking bonkers, with hordes of ticks descending on the cabin, pot farmers looking to kill the wilderness kids and something growing inside Carlton. I don’t want to give too much away, but take my word and watch it if you haven’t already. Alas, there’s no nudity, but you do get Dolenz in a very teeny black bikini. There’s plenty of slime and blood and ticks exploding like pus filled popcorn when flame touches them.

I wonder how Seth Green feels about this movie. If you didn’t know better, you would swear he would never get another acting gig. He’s that bad. But hey, he was young and learning. Without this, we might not get Buffy or Robot Chicken!

It’s been a while since I posted a movie review, but I felt this was good penance to make up for missing TICKS for the past 26 years. It is now my job to preach the word. The only thing creepier than the ticks in the movie are the millions of ticks around my house carrying Lyme Disease. Thank you, Plum Island buttholes for creating that little gift.

Now, go watch TICKS. I have to attend to my chiggers.

Oh, and if you revel in the squeamish delight of TICKS, your skin will crawl with joy when you read THE DEVIL’S FINGERS. Swap out bugs for a killer fungus and let the games begin! 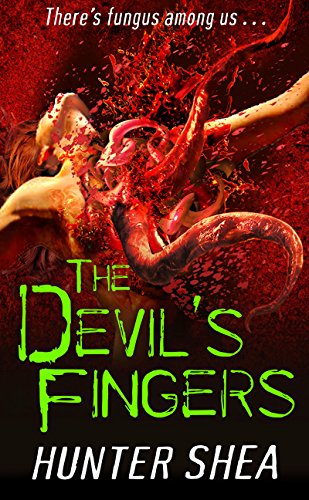