The Mystery of the Black Eyed Kids

Somehow, the phenomenon of the eerie Black Eyed Kids (from here on known as BEK) slipped under my radar during my formative years as a paranormal junkie. Apparently, strange pairs of children with deep, unnatural black eyes have been ringing people’s doorbells for decades. They’ve been linked to UFO appearances as well as ghosts.

People who encounter BEK get an immediate creepy vibe from the kids. It’s more than just their otherworldly eyes. They talk like they’re from another time and place and exude an undercurrent of menace. Their main goal seems to be to get you to invite them inside. They’re just kids after all. What’s to fear? Just who they are and why they show up asking to use phones or for directions to places that don’t exist is anyone’s guess. 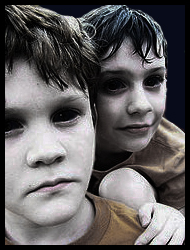 I first heard about them about a year ago on Jim Harold’s Paranormal Podcast. I’ve been intrigued ever since. Today it’s easy to dismiss them as teens popping in some contacts and playing a practical joke. But what about encounters with BEK in the 50s and 60s? Custom, cosmetic contacts were not something easily attained by anyone, much less local jokers.

Again, no one has any idea what’s behind BEK. But it is enough to give you pause the next time your bell rings at night.

Are BEK news to you, or is it something you’ve always known about? What are your theories? Too bad In Search Of isn’t around to whip up a creepy episode. Anyone have Leonard Nimoy’s number?

I’m going to write more about BEK in the coming months, but I thought I’d start you off with an excellent post I found on the Para-Rational blog. If you’re going to cut your teeth on BEK, this is the place to start. Here’s a taste and feel free to click over to read the rest of the post.

After combing through the storied about Black Eyed Kids that I can find, there are several traits that seem to commonly apply to run ins with Black Eyed Children.

They Travel in Pairs  – Most encounters with Black Eyed Kids are with two of them.  Why this is, I can only surmise as they need two to take down their prey?  One is usually the speaker while the other stands by silently.  Could it be that one is focusing on their mental attack while the other is verbally communicating with the chosen victim?

Black Eyed Kids Appear in Youthful Form – The normal situation is for the Black Eyed kids to apprear as a pair of kids in the 10 to 16 year old range.  Reports of younger kids are less common and there are a few reports of them appearing as adults as well.

The Insist on Getting Your Permission – Another universal trait is that they need your permission to enter your home, your car or to help you with something.  In some way you must invite them into your life.  Why?  This sounds like a classic vampire trait, could this be where that part of the vampire legend came from?  Every story so far has come from people that have refused.  I am guessing those that said yes are not around to tell their story.

Black Eyed Kids are Psychic – Another common element among Black Eyed Kid Stories is that they seem to be able to know what we are thinking and will show it by answering questions before we ask them, or by anticipating our actions.  This is very bad, because that means they are in our heads.  This also mean that they are able to do the next thing to us.

They Can Compel Our Actions – Commonly when people encounter Black Eyed Kids, they find themselves opening doors for them, or moving to help them without consciously deciding to.  All indications are that they Black Eyed Children can compel our physical actions to help them achieve their goals.

Their Eyes are Completely Black – This is obviously where Black Eyed Kids got their name.  When victims break their trance, they quickly realize that the beings in front of them have completely black eyes.  No white, just bottomless, black orbs.  Some debunkers have claimed that it could be kids with contacts or with the condition of Mydriasis.  If it was just this one trait, I might work with that theory, but this goes well beyond just having black eyes!

Their Clothing is Unusual and Drab – Another common element is that their clothes look old fashioned or even hand made.  This goes along with their strange manner of speaking showing that they don’t seem to have a grasp of human mannerisms.  This reminds me of the stories about the Men in Black that appeared in Point Pleasant in the 50′s and 60′s.