Once again, the folks at Graphic Audio have knocked it out of the park. The’ve gathered all three of my Mail Order Massacres novellas (JUST ADD WATER, OPTICAL DELUSION & MONEY BACK GUARANTEE) into one absolutely wild audiobook, complete with an astounding cast, monster sound effects and chilling music.

If you click over to Graphic Audio, you’ll get to hear a sample of JUST ADD WATER and hear the ravenous sea serpents begin their assault on the people of Virginia Avenue. This is an audiobook like no other. Listen to it with headphones on at night and I promise it will freak you out!

CLICK HERE TO LISTEN TO A SAMPLE AND GET YOUR COPY TODAY!

Forest of Shadows Coming to Audio

Great news. I was just informed that Forest of Shadows, the book that started it all, will be made into an audiobook! It will be available in 2015 – no definite date set yet. For you ghost fanatics out there, this is where the legend of ghost hunter Jessica Backman begins – a tale about her father staring into the abyss, searching for truths better left unsaid. This led to Sinister Entity and next year’s Island of the Forbidden.

I wish I could be the one to select who does the narration. Here are my top choices :

Who would you like to hear narrate the book?

If audio’s not your thing but you want to stock up on some spooky reading for Halloween, here’s what Forest of Shadows has in store for you –

John Backman specializes in inexplicable phenomena. The weirder the better. So when he gets a letter from a terrified man describing an old log home with odd whisperings, shadows that come alive, and rooms that disappear, he can’t resist the call. But the violence only escalates as soon as John arrives in the remote Alaskan village of Shida. Something dreadful happened there. Something monstrous. The shadows are closing in…and they’re out for blood.

Pick up a copy today at Amazon!

Skunk Apes Can You Hear Me?

OK, unless you live down in Florida or Louisiana in the middle of the swamps and you walk around shouting into a bullhorn, odds are, resident skunk apes (that’s an extra pungent, swampy Bigfoot for the uninitiated) aren’t going to pay you any mind.

However, you can now hear them! I am the very proud poppa of a bouncing baby audiobook. Swamp Monster Massacre is now an audiobook, expertly narrated by Michael Ray Davis, a man who nails the tenor and tone of the main character, Rooster Murphy. You can listen to a sample and pick up a copy at the Audio Bookshop for only $3.99 (you don’t see them come that inexpensive) by clicking on the audiobook cover below. 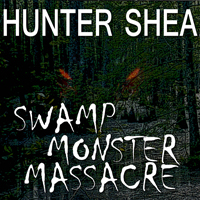 If you’re wondering just what the hell you’re in store for – skunk apes and a dude named Rooster? – I invite you to check out the latest review that was just posted on Horror Novel Reviews. Swampy earned a cool 4.5 out of 5. Not too shabby for creatures so shaggy. Here’s a quick excerpt from the review:

Hunter Shea’s novella is a great read that can be devoured in one sitting. It’s phenomenally paced, has great characters, and even better villains. The Skunk Apes (Bigfoot’s swampy cousin) are vicious creatures, hellbent on destroying the swamp’s intruders (or are they?). The way Shea introduces them to an unsuspecting audience is utterly fantastic. I tore through the story with the same anticipation as the eight-year old version of myself used to rip through R.L. Stine’s Goosebumps. — Tim Meyer for HNR

You can read the rest of the review here.