Nowhere to Run in Slasher Town

I have a special treat for you today (I’ll save the tricks for Samhain eve). Today’s guest post by Adrian Rawlings talks about the do’s and don’ts of fleeing from a crazed killer, ala Michael Meyers or Jason Voorhees. This is prime stuff, not to be missed if you live near a camp or broken down house with a sketchy past or anywhere in the Bronx.

Read on, then run to your TV and watch your favorite slasher flick!

You Can Run, But You Can’t Hide…

“Come out, come out, wherever you are.”

A horror movie really cuts to the core of our psyches when it hits close to home. Literally.

Long before R. Kelly took the world by storm with “Trapped in the Closet” (some would call this a horror of a film, but I digress and disagree), Michael Myers was driving Laurie Strode into the same fate. 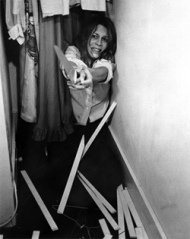 You know how it goes. You’re enjoying a nice bubble bath, thinking about life, relaxing and minding your own business, when all of a sudden, the call is coming from inside the house.

Your location has been compromised. There’s no rewinding the tape on that one. Now what do you do?

The DON’TS:
~ The worst place to hide is, as we all know, the closet. It’s the first place murderers are going to look, and there’s only one way out – the way he’s coming in, cleaver first.

~ Don’t hide in the shower. Not only can a bloodthirsty Psycho see right through the curtain or misty glass. Is that how you want to go? And how easy is that cleanup going to be? Prints destroyed, blood washed away. Don’t be so easy.

~ Come on, don’t hide under the bed. Monsters inherently live under there, so they’ll certainly look there first. Same goes for hiding under other pieces of large furniture.

THE DO’S:
~ Push that copy of Steven King’s IT and step into your rifle-and-canned-food-filled secret passageway. This may be an extreme, but every house has some secret hiding places. Here are 35 secret passages that can be built in to homes.

~ How flexible are you feeling? Can you hold yourself up near the ceiling using four points of contact? Serial killers too often wear masks or have parts of their faces missing, so peripheral vision is not their strong point. Try hiding in an unlikely kitchen cabinet, a bean bag chair, etc. Get creative in where you would hide to avoid becoming an easy target. Look for a piece of furniture you can fit into instead of under.
~ Run outside… with caution. It will most likely be night time. Are you wearing white? A negligee? A white negligee and it is raining? These things make your capture all the more likely. However, if you live near a police station or a town with an unsexy nightlife, you are going to be fine. Hopefully you don’t have to run through the woods, if you do your chances of surviving decreases tremendously.

The serial killer trope will always be alive and well, no pun intended. That’s why they’re serial.
The more they murder, the better they are at hide-and-seek. Deep in our fragile cores, we’re all pretty terrified of a home invasion that results in the ultimate, undignified, drooling-and-shitting-our pants-sacrifice. Hide-and-seek is a universally loved childhood game. Keep your head, don’t move or breathe, and you’ll live to see the sequel. Stay up on the chiller horror shows on Directtv to see how people are being found by their killers. Avoid following those same footprints if you find yourself in those unfortunate predicaments.

Adrian Rawlings is a TV and horror blogger.  Look to him for the scoop on hit movies and TV shows, horror, tech reviews, how-to’s, and more.