An Exciting New Project – CLASH OF THE CRYPTIDS!

Bigfoot battling Chupacabras to the death! The Jersey Devil squaring off in an aerial fight with Thunderbirds! Mongolian Death Worms rising from the earth to swallow up Mothman! Dover Demons running rampant! Loch Ness Monsters bursting from the Loch to devour villages! The world is overrun with monsters, and only a select few can stop the madness.

Imagine all of that and so much more. Welcome to my Patreon exclusive choose your adventure monthly serial, CLASH OF THE CRYPTIDS!

Starting in September, we’re going to make history together with the first ever choose your adventure horror novel. CLASH OF THE CRYPTIDS will feature returning characters from my past books, including :

The Willet clan and Norm Cranston (The Jersey Devil)

And a few more surprise guests.

For just $1 a month, you not only get to read each monthly installment, but vote on where the next chapter will take us. A poll will be posted after each chapter and YOU DECIDE the next chapter. For $3 a month, you’ll also be a character that will eventually become cryptid chow. Monsters gotta eat! For $5 a month, you’ll receive a print edition of the book when it’s complete. And all pledge levels get other exclusive access and behind the scenes peeks into my insane life.

So, if you want to be part of cryptid history, visit Patreon today and become a true blue Hellion. We’re taking the cryptid mania right to 11.

Special shout out goes to Jerry Mulcahy for designing some of the best damn artwork for this beast of a book!

Strap in folks. The world’s about to get a whole lot more interesting.

Talking about the Jersey Devil on Jim Harold’s Cryptid Report

I can’t even express how exciting it was to be featured on Jim Harold’s Cryptid Report. He has the world’s #1 paranormal podcast, featuring the brightest stars in the fields of the paranormal, UFOs and cryptozoology. And here I come, interloping on greatness. 🙂

We sat back and talked about The Jersey Devil. Is it real? Where did it come from? Where is it today? And what else is lurking in the dense, remote Pine Barrens? Click here to listen to the interview and find out…

And you can still grab a copy of The Jersey Devil for only 99 cents. Offer ends March 1st. 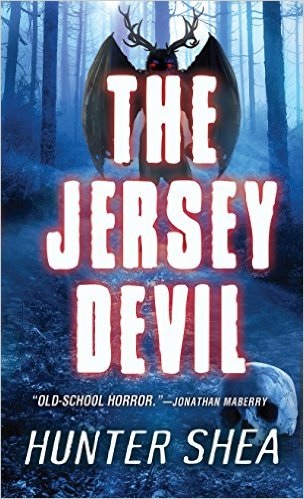 Inside The International Cryptozoology Museum

Hey, fans of Bigfoot, Mothman, the Jersey Devil, The Dover Demon, Sea Serpents, Chupacabra and all creatures strange and undiscovered, did you know that there’s an International Cryptozoology Museum? I didn’t, and I have been vacationing right outside its doors for years! Located in Portland, Maine, it’s owned and run by world famous cryptozoologist, Loren Coleman. He’s the man who actually coined the terms for many now famous cryptids such as the Montauk Monster and The Dover Demon. You’ve seen him on TV and documentaries like Ancient Aliens, MonsterQuest and Weird Travels. The best part is, when you go to the museum, Loren is there to greet you and talk monsters.

As soon as I found out about it, I had to drag my kids to see it for myself. Located on a small side street off the main drag in downtown Portland, we were greeted by a flag depicting a Coelacanth, a large fish thought to have been extinct for millions of years until one was pulled from the depths in the 1930’s. Loren informed me that the prehistoric fish was the inspiration for my favorite Universal Monster, The Creature from the Black Lagoon.

Loren quizzed us on what was on the flag and I passed the test!

Inspired by a fish!

The museum consists of two rooms jam packed with actual artifacts from cryptid investigations as well as recreations. I was immediately drawn to some of the Bigfoot plaster casts and the news stories accompanying them.

Loren actually owns the largest Bigfoot in the world and he’s happy to take pictures with everyone standing in front of old Squatchy. Being next to a legend in the field by a giant Bigfoot was the highlight of my trip.

Me, Loren and my favorite hairy dude

Once we got through the huge Bigfoot displays, there was a host of other mysteries and wonders to explore. Turning a corner into the other room, I came face to face with the legendary Fiji Mermaid, a bizarre, mummified creature that P.T. Barnum used to proclaim was an actual mermaid. It kind of looks like a shriveled up Yoda with boobs. I wonder of Lucas got his inspiration from this. 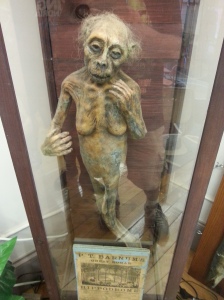 “Powerful you have become, the dark side I sense in you.”

The second room had a little bit of everything, from a small Chupacabra display…

A little goat sucker under glass

To the Dover Demon, an alien-like creature that appeared in a Massachussets town over a 2 day period in 1977.

Turns out, Loren investigated the strange and creepy Mothman and was even friends with John Keel, the man who reported on the infamous cryptid. He was a consultant for the movie, The Mothman Prophecies and starred in a documentary on it. It’s my belief that what went on in that West Virginia town in the 60s is one of the weirdest events of all time. You can check out our Monster Men podcast on the subject here.

You could dedicate a whole museum to the Mothman

Loren told me that he was the man who gave the Montauk Monster its name. He also said it was just a decomposed raccoon. Bummer.

I don’t know, this doesn’t look like a raccoon to me

The museum has it all. For a guy like me, I could have stayed there all day, but it was getting late and we had a Duck Boat tour to take and a baseball game to see. So, if you’re ever in the Portland area, I highly suggest you check it out. It must be popular, because it was even mentioned on the Duck Boat tour. There are monsters everywhere….at least I hope.