The Hunt for the Loch Ness Monster Goes Hi-Tech

Is the truth about the existence of a lake monster in Loch Ness just around the corner? 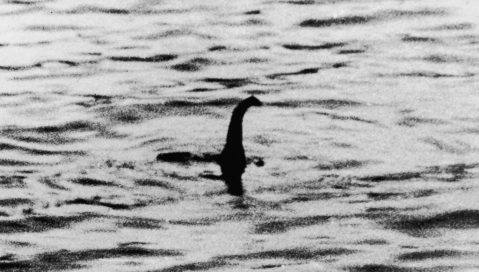 Scientists from the University of Otago have already gathered over two hundred samples from the famous Loch and plan to run Environmental DNA (or eDNA) testing to suss out the wide and varied life forms living under the dark waters. Even passing creatures will leave their mark, a floating residue waiting to be analyzed.

The kid in me is excited. As a matter of fact, so is the adult. It’s said that we should know if anything anomalous and Nessie-like has been found in a few months. Look, I’m not running to Vegas to lay down good money that we’re for-sure going to find out that Nessie is real. But I am fascinated to see what they do find. The Loch is bigger than you think and the odds of finding an elusive creature are slim, but for my money, this is the largest net cast yet for answers.

Wouldn’t it be fascinating to find out the Loch Ness Monster is real, and to finally know what it really is? Or is it better to let it remain a tantalizing mystery? What’s your take on this latest search for Nessie? Comment below and I’ll pick 2 random people to receive a free ebook of LOCH NESS REVENGE.

Screw yard sales where strangers fondle my stuff and try to rip me off for my collector’s edition Six Million Dollar Man Bigfoot action figure. Or take a whiff of my old bowling shoes, turning away in disgust. I have a wife to give me those looks, thank you very much.

Nope, I prefer to do this the new-fashioned way. It’s over 90 degrees here in the Big Rotten Apple, which gets me to thinking of books to bring to the beach. If you want to build your own beach read pile, I’m here to help. It’s time for a book sale!

I have limited quantities of the titles above, along with a couple of others. If you’d like one, or two or more, send an email to huntershea1@gmail.com with the titles you’d like and your address. Payments will be made via Paypal. All books will be personally made out to you so you can prove to everyone that you’re a true Hellion. You’ll also get bookmarks and I’m going to see if I have any official Hellion stickers in the mess I call an office. Be the coolest Mofo on the beach. Impress the ladies. Capture the man of your dreams. Read horror and grow rich!

The prices below include shipping.

My latest novella with Severed Press is now available in ebook (and trade paperback in a few days), LOCH NESS REVENGE. This one is especially near and dear to me because Nessie became one of my first monster obsessions thanks to an episode of In Search Of back in the 70s (you can watch the actual episode here). I remember checking out every book I could find in the libraries in the Bronx, wishing I could fly to Scotland and just live by the Loch, searching for proof of Nessie.

Cut to a few decades later, and I’m hunting her down in a book that blends fact with fiction. So, what’s this latest foray into cryptid terror about?

Deep in the murky waters of Loch Ness, the creature known as Nessie has returned. Twins Natalie and Austin McQueen watched in horror as their parents were devoured by the world’s most infamous lake monster. Two decades later, it’s their turn to hunt the legend. But what lurks in the Loch is not what they expected. Nessie is devouring everything in and around the Loch, and it’s not alone. Hell has come to the Scottish Highlands. In a fierce battle between man and monster, the world may never be the same.

And here’s a little something to whet your appetite (or wet your appetite, when you’re talking lake monsters!) Read the preview of chapter one and if you like what you see, you don’t have to go all the way to Scotland to grab a copy.

Even the Scottish whisky can’t stop the nightmare from coming. And believe me, they have some pretty incredible shit here. The locals drink it like water, but I’m not a local.

I may have been here for five years, but they’ll never accept this American interloper. Fine by me. I realize I’m just a transient, albeit one that’s been here for a handful of years. When the time comes, I’ll be happy to leave the Highlands forever. A girl can only take so much sourdough and tartan.

Hmm, but I will miss the scenery. So pretty out here. Well, when it’s not foggy, overcast, or raining. And the Scottish men, nothing to complain about there, though I wish I could understand them a little better. I have a terrible ear for accents and sometimes I can’t believe we speak the same language. I was barely able to understand what went on in the movie Trainspotting. This is a whole new level.

I’m up and sweating and can’t catch my breath.

Is it technically a nightmare when the thing that wakes you up in the dead of night is a memory?

Not that it matters.

Nightmare…memory…either way, I can never get a full night’s sleep.

I slip my legs out from under the covers, grab the glass of tepid water I keep next to my phone charger, and gulp it down. When it comes, I sweat enough to soak through my clothes.

Years ago, my simple solution was to sleep in the nude.

It didn’t work out. Changing sheets is a hell of a lot harder than slipping on a fresh pair of panties, sleep shorts, and a T-shirt.

The spare clothes are neatly folded on the floor by my feet. I stand, stretch, get down to my birthday suit, pat myself down with a towel, and get dressed.

The radio is still on, some late, late night call-in show hosted by someone with such a thick accent, I can barely understand what the hell he’s talking about. Like I said, I’m Scottish tone deaf.

Snapping the radio off, I collapse back into bed.

The good news is, the nightmare never comes twice.

The bad news is, falling back to sleep is never a guarantee. It’s almost four in the morning.

Early to bed, early to rise.

I went to bed at midnight. Not sure that constitutes early.

I close my eyes, the remnant of the nightmare – memory – still playing like an old filmstrip as the heat from the projector bulb rapidly melts it away.

It was 1995. Shania Twain had exploded on the music scene. I couldn’t stop playing her CD. The fact that it pissed off my twin brother Austin was just a bonus. He was all grunge, all the time, back then.

We were camped right where my RV sits now. Me, Austin, Mom, and Dad.

My father had been downsized by the genetics company where he’d worked for almost twenty years. They gave him a goodbye package that left us flush with cash. No tears were shed. He was a scientist toiling away for a corporate entity. He’d felt he’d sold his soul for long enough.

So he took us out of school and we headed for Europe. He’d missed the chance to live his dream and backpack across the continent when he finished college.

“It’ll be much more fun with you guys. I knew I waited for a reason,” he’d said.

Austin and I didn’t care where he took us. We were just glad to be out of school for the rest of the year.

We alternated between camping out when the weather was agreeable and staying in nice hotels, especially when we were in cities like Florence and Berlin and Barcelona.

By the time we made it to Scotland, spring was fading into summer, and Dad wanted to sleep under the stars in the Great Glen, the glacial fissure that tore Scotland a new one 400 million years ago. The words lush and green are all you need to know to describe the Great Glen. Nature done did it right when she painted this scenery.

Smack in the middle of the glen was a series of lochs, one of them being my current home and setting of my nightmare – Loch Ness.

“We can’t go to Scotland without spending some time at Loch Ness,” my father had said. “Maybe we’ll even see the monster!”

We thought that made this place the coolest stop on our trek across Europe.

It was dark. Austin and I were roasting marshmallows over the remains of our fire. Our parents went down to the water’s edge to clean out the pot we used for cooking chili. I was playing Shania Twain on the boom box, but had to keep it low. When Austin tried to hit the Stop button, I whacked him on the back of his hand with the hot end of my marshmallow stick.

“Jeez, that hurts you asshole!” he shrieked, cradling his hand to his chest.

“You’re such a baby. I can’t believe you came out first. Mom saved the best for last.”

He chucked a marshmallow at my head.

I shrugged it off. We’d been saying the same things to each other for so long, we could recite each other’s lines.

It was then we heard the screams.

Two screams, to be exact.

My mother and my father.

We bolted to our feet, spilling the plastic bag of marshmallows into the fire.

There was a tremendous splash of water.

We ran to them, heedless of what we might encounter. Someone was attacking them. A deaf person could hear their struggle, the pain and terror in their cries.

We got to the shore a moment before we lost them forever.

Their heads were visible, floating atop the churning water. Something big and black and shiny, like the body of an anaconda, was wrapped around their necks. It must have given a sudden, powerful squeeze, because their voices were cut sharply.

“We have to help them!” Austin blurted, going so far as to get in the water up to his ankles.

But I held him back.

I watched my parent’s eyeballs puff up and explode from their sockets seconds before they were dragged down into the Loch’s murky depths.

I watch them die every single night.

I can’t un-see their eyes, blowing up to cartoonish proportions before popping like balloons filled with mayonnaise and blood.

It’s why I fucking hate looking at people’s eyes. I can barely stand to look at my own in the mirror. I haven’t worn makeup in years just to save myself the horror.

I’m not the least bit tired.

Early to rise it is.

If it isn’t, oh well. I’ve got nowhere else to go.

Care to see what adult Natalie and Austin have up their sleeve for Nessie? Go to Amazon and pick it up today.

I have a little something special to share with my Hellions. Here is the cover to my second novel with Severed Press, LOCH NESS REVENGE. Ain’t Nessie just beautiful? I love the art department at Severed. The book will be available on November 3rd.

Until then, wear some tartan, drink some whiskey and have a shortbread cookie or two.