Movie Review : AS ABOVE, SO BELOW 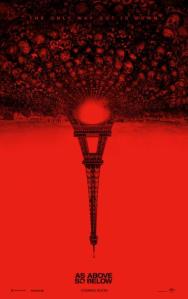 Let me start off by saying 2014 has been the worst year for horror movies in recent memory. Searching for anything new worth watching has been like hunting for truffles with a pig with a sinus condition.

Theatrical releases have been paltry to say the least. When OCULUS is the movie to beat, things are bad. So naturally I was chomping at the bit to see AS ABOVE, SO BELOW. I don’t think I’ve logged on to Twitter in the past month without seeing a tweet about the movie. Their marketing push has been big time (and if I’m seeing it all the time, they know their target audience). Plus, the catacombs under Paris have always intrigued me, so it became a must-see.

Now, be warned, this is yet another found footage flick. Once I realized this, I was accepting that there would be logic holes, as in – why the hell are they still filming when they should be running? And I knew there’d be enough shaky handheld camerawork to make my lunch bubble up my esophagus.

That being said, I actually enjoyed the movie. Like Alien and The Descent, it preys on our fear of the dark and tight, cramped places. The only thing that can make it worse is the knowledge that something sinister is lying in wait in the stagnant pitch. If you’re claustrophobic, you might want to bring a Xanax to the theater and the number to your therapist.

Although it takes a while to get to the actions, once it starts, it never lets up. Yes, there are jump scares that you see coming, but even a hardened vet like me was given a start several times. It’s loaded with creepy sounds and images that after a while make it feel as if you’ve jumped on the haunted house ride from hell. Speaking of hell, if priests could convince people that what lies within these catacombs is a preview of an eternity in hades, churches would have to be expanded to house everyone with a pulse.

The story centers around a young, pretty professor named Scarlett who is the female equivalent of Indiana Jones. Her lifelong search for the fabled Philosopher’s Stone, that alchemistic magical stone that can turn common elements to gold and grant eternal life, has brought her to the catacombs under Paris. With a seasoned team of urban explorers, she hurdles without trepidation to a place far deeper and more terrifying than corridors lined with bones and skulls.

I’m not going to spoil things here. The acting is better than most found footage films and the story, though weak at points, keeps the tension pretty high for the last third of the movie. It’s a great date movie if you want to have your girl grabbing you and seeking the comfort of your embrace.

I think people tend to over analyze movies in general. Horror movies like As Above, So Below, have to be appreciated  for what they are – a great excuse to hold someone’s sweaty hand and have your heart rate accelerated every few minutes.