You all know how much I like to get my squatch on. I’m always on the lookout for new flicks about Bigfoot…and aliens. Well, here’s one that hits DVD and VOD on March 8th. It’s called STOMPING GROUND and it looks like a hell of a ride. Hellions, start your squatches! 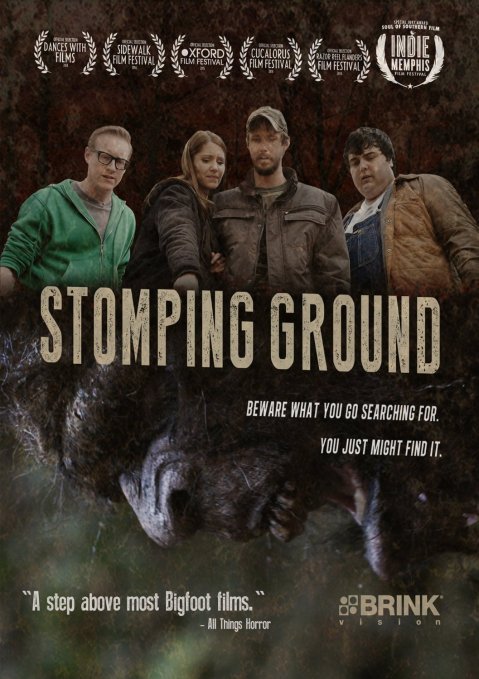 First, the elevator pitch – “A young couple on a weekend trip in the American south embark on an impromptu “Bigfoot hunt” that threatens both their relationship & their lives.”

Ben & Annie are a young couple living in Chicago, on a weekend trip to Annie’s small North Carolina hometown. At the local bar they run into Paul, a charming old friend of Annie’s, and Ben learns something he never knew about his girlfriend: She believes in Bigfoot. In fact, she and her friends used to “hunt” for the creature when they were kids. Before Ben knows it, he’s off on an impromptu Squatchin’ trip deep in the Carolina backwoods. Amidst the Squatch calls, campfire stories and beers, Ben quickly realizes that Paul may have an ulterior motive in bringing Annie to the woods. And something else out here seems to be after her as well. Everyone but Ben thinks its Bigfoot. But it can’t be, can it? After all, Bigfoot isn’t real…

And as an added bonus, the film features a cameo performance from Theresa Tilly, best known as one of the original “Ladies of the Evil Dead” from Sam Raimi’s horror classic, The Evil Dead.

Check out some of the early reviews –

“Successful in warming the hearts and chilling the bones, Stomping Ground is a whole lot of fun to watch.” – Ain’t It Cool News

“It’s not easy to find a creature feature where the characters are as relatable and believable as they are in Stomping Ground.” – Film Bizarro

Get your best tree knocking bat and deer pheromones and join me in the forest, won’t ya?

For all the latest Squatch news, sign up for my free Dark Hunter Newsletter today.

Almost 2 years since its release, SWAMP MONSTER MASSACRE is still rolling along. The world has much love for skunk apes. It’s now available as an audio book and was just given a 4 star review on Audio Book Reviewer. I want to give a big thank you to them for not only taking the time to listen to the book, but also to post such a great review. Now let’s see what we can do about getting the Skunk Ape family on the big screen where they belong! 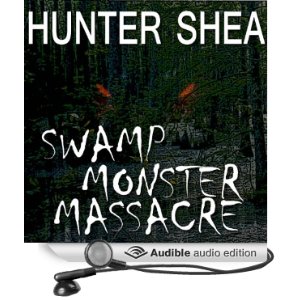 I want a no holds barred, hold on to your seat, massacre. Bloody, nonsensical, all out war on humans by the Big Feet, Swap Apes, Sasquatchs, yetis, whatever you choose to call them. There is a whole lot of room for interpretation on what they will do, being that they may or may not exist.

B-horror movie fans rejoice, Hunter Shea has brought you the ultimate tale of bloody terror! It starts off very quickly with lots of action. We are introduced to Rooster, not a very good man at all. He kills a drug lord, in self defense of course, and is now on the run from his minions. Hijacking a tour boat full of as random a cast of colorful characters as if Shea picked them out of a hat. This is not a bad thing, but very reminiscent of my favorite B-horror flicks. Soon shipwrecked in the middle of the Everglades, they find out the hard way that they are not alone.

After accidentally killing a furry ape like creature, our band of hooligans are now in a race to survive the primal revenge of these beasts, finding that primitive monsters have tricks up their proverbial sleeves.

With an original and engaging writing style that I enjoyed a lot, Shea has created a unique and fast tour of the Everglades full of ridiculous violence, very descriptive gore, severed limbs and all. Straight up monster horror through and though. I look forward to more!

How many of you have ever gone squatching? It’s number one on my bucket list. I’m even willing to travel far just to have the experience. Where are the best places to squatch?