The Sinful Man Comes Around

My good friend and awesome author, Keith Rommel, has released the fantastic 3rd installment of his Thanatology series, THE SINFUL MAN. This guy is the goods, folks. His books are on my official required reading list. Everything you need to know about THE SINFUL MAN and all of the books in the series is right here! Read on, then head to wherever you buy books and get ’em.

Leo needs something . . . his stomach growls, but it can wait. That’s not hunger he must feed. He has to get to his next high, but without money he knows he can’t buy what he needs to sate the voice inside telling him to get more, get more.

No luck asking his father. His mother is in no position to help. After failing to steal the money he desperately needs, Leo must appeal to his dealer, the dangerous and infamous Saint Nick—despite the inevitable beating he’ll take for showing up empty-handed. Still, anything to keep the voices and flashbacks at bay . . .

Leo soon learns that everything has a price—not just money for drugs, but that every choice he makes has a repercussion. Suddenly caught between a world where he can see the sins of his past and a new consciousness that he doesn’t fully understand, Leo finds himself not only chasing the dragon, but being chased by demons of a whole different kind. He must learn the finality of being past hope—all while reliving his missed opportunities for second chances—and truly come to understand that he is responsible for his own undoing before he runs out of time. After a lifetime of bad choices, this Sinful Man discovers the consequences to his actions and the mortal responsibility of exercising free will.

What others are saying:

“Downright chilling. Rommel has woven another nightmare that will haunt your days and nights!” — Hunter Shea, author of The Montauk Monster and The Waiting
——–
“Reading late into the night, this had me wanting more… and dreading it.” — Catherine Jordan, author of Seeking Samiel
———
From the very beginning of The Sinful Man, Keith Rommel grabs the reader by the throat and catapults him into a world where the reader’s own pounding heart screams that nowhere is safe. –Thomas M. Malafarina, author of Dead Kill – Book 1 – The Ridge of Death

The rest of the Thanatology Series:

Book 1 – The Cursed Man — soon to be a major motion picture:

The Cursed Man, by Keith Rommel, tells the story of Alister Kunkle, a patient at Sunnyside Capable Care Mental Institution. Alister has been in seclusion for the last 25 years, having no contact with the staff or the outside world. The reason for this is that anyone who communicates with Alister dies within the day, for he is the Cursed Man and Death takes a professional interest in those unlucky enough to cross his path.

Believing him simply deranged, Dr Anna Lee, an up-and-coming young psychiatrist, has come to cure Alister. She is warned about Alister’s past and is shown evidence of previous encounters made by the skeptical or unbelieving, all of whom died, sometimes horribly. Regardless of the stories, Anna will not be dissuaded and is reluctantly allowed access to Alister. All assume her fate is sealed, but when she returns unharmed the next day, we also start to wonder about the stories.

So begins an enthralling narrative told in the past and the present as Anna attempts to learn why Alister believes he is cursed, while at the same time trying to convince him the events were not real and that in fact he is merely ill and so can be cured. Is Alister truly followed by death or is he simply mentally ill? The Cursed Man is an extremely well-written suspense horror story… I enjoyed it immensely; right up until the very end I was never sure of the outcome… Great story-telling in the tradition of Stephen King… — Booklore

What happens after we die? Are we given choices based on how we lived our lives? It’s an age-old question pondered by just about everyone.

Author Keith Rommel dared to explore the answer by creating his newest novel The Lurking Man, a story of dark suspense that unmercifully reveals the life of a self-deluded, neglectful mother who caused irreparable damage to her family and ultimately struggles with death as much as life. It’s the second novel in his suspenseful and thrilling Thanatology series that began with the eerie, spine-tingling The Cursed Man.

“Imagine Death knowing your deepest, darkest secrets and all of your private pain,” said Rommel about The The Lurking Man. “Now imagine it wants to use what it knows against you so that you bend to its will.”

In the Lurking Man, main character Cailean stands beneath a spotlight in a blinding snowstorm. She has no idea where she is or how she got there, but she senses something moving around her in the darkness outside the light.

When the ominous presence calling himself Sariel makes himself known, he declares that he is Death Incarnate and that Cailean has died. He has taken her to the Aperture, a place between the living and the dead, where he will force her to face the sins of her past in exchange for twenty-four hours of life to try and right her wrongs. But what she must do in return for this precious time is unthinkable.

AVAILABLE WHEREVER BOOKS ARE SOLD

Keith Rommel Is Not A Cursed Man

Talk about a coup! Jack and I ran into author Keith Rommel at last year’s Monster Mania in New Joisey. His absolutely chilling novel, The Cursed Man, is currently being made into a major motion picture. When I say it is one of the most original, thought-provoking novels you’ll read all year, I ain’t kiddin’. I can’t wait for the movie.

Keeping up with our vow to bring you interviews with the best in horror, the Monster Men snagged Keith for almost an hour to talk about his books, his path to publication, what it’s like to have a movie made from his book and his favorite monsters. If the publishing gods are paying attention, Keith will become a household name in the very near future.

So, kick back, pour a mug of your favorite beverage and get to know Keith Rommel.

Keith Rommel is one of the hottest talents in horror and suspense today. Take a peek inside his unique mind…

Set to be released this fall, The Cursed Man novel is being filmed for the big screen. This thriller features Alister’s relationship with Death and the impending doom that has settled in around him, and is sure to leave you with feelings of discomfort and shock. Whether you are a fan of Keith Rommel’s work or new to the series, his new film and most recent release are sure to spark your interest. The Cursed Man is the first installment of the Thanatology Series and is followed by TheLurking Man and The Sinful Man, which is set to come out this May. We got the chance to pick Keith’s brain about the series’ success in an interview and are excited for this year’s releases! Check out the interview and photos below for more about the series. 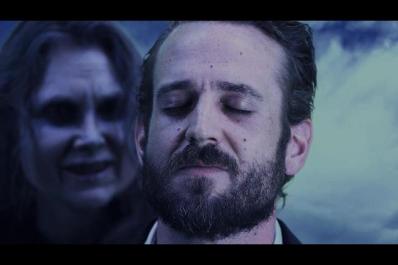 Sunbury Press: What type of reaction are you hoping for when readers…

I was recently at Monster Mania Con cruising through the vendor tables, checking out celebs and attending a screening of Frankenhooker when I ran into author Keith Rommel. His booth was tucked away between a couple of others selling tons of horror merch. Now, I’m a huge reader, so when I see books at a horror con, I’m all in. (On a side note, it’s depressing to watch people pay $40 for an autograph of Screech or a dude who played a Jawa, then walk past author tables like they have the plague. The best horror isn’t on screen, it’s in a book!!!)

I digress. At first, maybe because I’d had a few cocktails, his name and book, The Cursed Man, didn’t register. Once we got to talking, we realized we’d both spoken to each other through various social media over the past year. Small world. Keith was kind enough to give me a copy of his book, which is now going to be a major motion picture. Let me tell you, I read it in one day and it was time well spent. 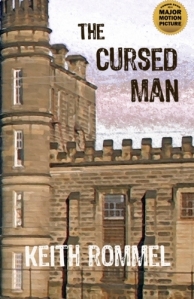 Here’s the official description of this amazing book:

Alister Kunkle believes death is in love with him.  A simple smile from friend or stranger is all it takes to encourage death to kill.
With his family deceased and a path of destruction behind him, Alister sits inside a mental institution, sworn to silence and separated from the rest of the world, haunted by his inability to escape death’s preferential treatment.
But when a beautiful psychologist arrives at the institution and starts offering him care, Alister braces himself for more killings.  When none follow, he tries to figure out whether he truly is insane or if death has finally come to him in the form of a woman.

As a reader, I’m always on the lookout for fresh, original ideas. The Cursed Man is all that, a bag of chips and a bottle of grape Nehi. Writing like this is as delicious and hard to find as the favored beverage of my youth.

The Cursed Man is tight, suspenseful and at times, downright terrifying. Death follows Alister Kunkle like a loving shadow. The book flashes between the past and present with perfect transitional timing. The twists and turns in Alister’s story left me dizzy. I honestly had no idea what was going to happen next, to the point where I just sat back and let Rommel take me on a joy ride to hell and back. He does an excellent job sucking us into the mind of a tortured man, to the point where neither he nor the reader can discern what is real and what is fantasy. I don’t want to say too much or give away any spoilers. This book is too special.

The Cursed Man is part one of the Thanatology Series. Rest assured, I’m picking up a copy of the second book, The Lurking Man, right after I finish this post. I’m not saying this just because I met the author. I was truly blown away and can see why Hollywood snapped it up. Do yourself a favor and check it out. You can thank me later.