The great thing about being part of the new Samhain Horror family has been meeting some of the new and seasoned authors that they have brought together. Russell James is one of those cool dudes in a loose mood. He has a chilling new novel out, Dark Inspiration. If you want to read a book that will actually make you sleep with the light on, look no further. This is classic horror at its best. Russell was nice enough to sit down for an interview with yours truly. Enjoy!

1. Your novel, Dark Inspiration, is right in my personal sweet spot. It
has a haunted house, creepy old cemetery and sinister secrets. Tell us a
little more about the book, especially something that will put chill down
our spines!

Doug and Laura Lock try to fulfill many couples’ fantasy.  They quit their
jobs and move to a country dream house and hope to re-fire their personal
and professional lives.  But Doug finds a hidden attic full of some creepy
taxidermy left by a deceased former resident and starts doing some twisted
experimentation.  You experience Doug’s personal descent from inside his
head, and it’s not pretty.  His plans for his wife are…well, you’ve got to
read it. 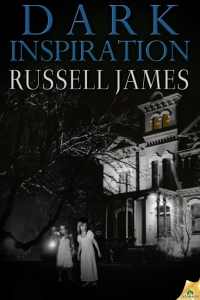 Laura is influenced by the spirits of two twin girls and Doug encounters
the spirit of their uncle.  Neither of them shares their experiences with
the other and so start living parallel, secret lives.  When the lives
finally intersect, it goes off the rails.  Way off.  Honestly, the two of
them could have used some paranormal advice from John Backman from your
Forest of Shadows.

2. What was the aha moment in your life when you decided you wanted to
become a writer?

I remember having a short story published in a junior high literary
journal and thought that was the coolest thing ever.  But the idea of
seriously writing and having other people want to read it was so daunting
a task, I never considered trying.

I would tell my wife stories I thought up when we went on long drives in
the car.  She kept bugging me to write them down.  Tired of my lame
excuses not to, and knowing I worshipped at the paperback altar of Stephen
King, she bought me his On Writing for Christmas a few years ago.  Reading
that made me realize that I could write something, if I applied myself.

3. Every writer has a special journey to publication. How did you come
about having your book published by Samhain?

Again, credit goes to the wife.  The next Christmas after On Writing
arrived, she got me an online writing course at Gotham Writer’s Workshop.
Two short stories I worked on there ended up getting published.

Nice start, but several unsold novel manuscripts later, success wasn’t
knocking.  I took an advanced Gotham class to see what I skills I was
missing.  During that class, the instructor alerted us that Samhain was
having the equivalent of open auditions for horror books.  I had Dark
Inspiration fresh off a tour of publisher and agent rejections, so I sent
it in.  In a million-to-one-shot, Don D’Auria bought it.

Trust me, I wake up every morning thankful for the stroke of luck that got
me here today.

4. What book have you read that really scared you and made you want to
sleep with the light on?

I really like reading collections of true ghost stories.  A personal
experience when I was kid made me a true believer.
There are times I’ll read about an event and both arms go to goose pimples
and my heart skips a beat.  That’s the good stuff.

5. OK, suppose you had to hire a monster as a contract killer. Out of
Jason, Michael Meyers, Freddie and Pinhead, who would you choose and why?

I have to send Freddy Krueger.  He can kill someone in their dreams
without a trace.  Plus in his free time I can have him Edward Scissorhands
my backyard shrubbery.

6. In three sentences or less, describe what you’re currently working on.

I have a short story coming out in December on a podcast called Tales of
Old. It’s historical fiction about a World War I fighter pilot.  So you
can read it on the website or download and listen to it.

The next novel is called Sacrifice and will be out sometime in 2012.  A
group of kids destroy an evil demon in 1980, but thirty years later find
out they may not have finished the job.  They return home to confront the
demon, their own aging, their past mistakes.  The demon isn’t going to go
quietly, and this time has friends.

Visit Russell James’s website to learn more and order a copy for the holidays!

And if you want even more reasons to be afraid of the dark, check out Forest of Shadows.