It Follows – In The Footsteps Of Horror Greatness

It seems like it’s been decades since I was this thrilled by a horror movie. And when I sit back and think about it, 30 years is about how long I’ve been waiting for a movie like It Follows. Maybe it’s because the movie has a whole late 70s, early 80s vibe, taking me back to the time when I was young and enthralled by the movies of John Carpenter and George Romero. In fact, there are so many elements of It Follows that remind me of Halloween, yet with an entirely unique story and feel, that I felt like a teen again, experiencing a whole new world of horror at its best. 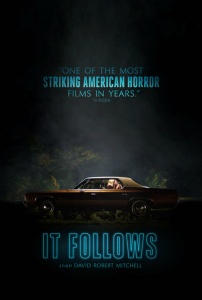 Here’s the story – Jay (played by Maika Monroe, who was just in the horror/thriller The Guest) is a kind of directionless girl living in the suburbs of Detroit. She has a tight group of friends (her sister, Paul who was her first kiss and also kissed her sister when they were younger, and Yara, a girl who spends all her time reading ebooks on a pink clam shell) who just hang out with no real aspirations or parental supervision. We only see Jay’s mother from side angles, and when we do, there’s always booze nearby, so we get the feeling that this generation has been left to themselves.

Jay is dating a guy she met outside the neighborhood. He takes her out one night and they make good use of the back seat of his car.As she’s basking in the afterglow, he chloroforms her, straps her to a wheelchair and has her sit in an abandoned building, waiting for a spirit to begin stalking them. He explains that by having sex, he’s transferred a curse to her. She will be followed by a spirit that can look like anyone until she passes it to someone else. If she gets caught before she does, the spirit will kill her and in turn, kill him.

The rest of the movie is spent with Jay running from the shape shifting spirits. They walk slow, but they also never, ever stop following you. She can drive far to buy some time, but the spirits will always catch up with her. There’s never really a moment of full rest, and you can feel the desperation with each frame. Her friends stick by her, but even they can’t help much because they can’t see what Jay can and no one knows how to stop it.

Now for the look of the movie. All of the cars in It Follows are hulking behemoth’s from the 70’s/80’s. From the decor of the houses, to landline phones and even the way people dress, you’d swear the movie was set in 1979. The only connection to modern times is Yara’s e-reader. Viewers are shown the absolute depression of Detroit, with rows of abandoned, crumbling homes. I feel the director chose to stop technology and fashion right when Detroit was beginning to falter, capturing the final heyday of a city in amber.

The opening sequence of It Follows is the best I’ve seen since Halloween. The score is absolutely chilling. I went out and bought it an hour after I saw the movie. It’s part of a new wave of horror movies using synth soundtracks, just like they did back in the day, to set your nerves on edge.

We all know that horror movies have long conveyed that premarital sex leads to very bad things. I can think of no worse consequence than the curse bestowed on Jay in It Follows.

And yes, I’m going to come right out and say this is an instant classic. For my money, it’s the best horror movie I’ve seen since Carpenter’s The Thing. I get the sneaking suspicion that writer/director David Robert Mitchell is as much a Carpenter fan as I am, because he’s created something that can proudly sit alongside the master’s best works.

4 responses to “It Follows – In The Footsteps Of Horror Greatness”