Are you despondent over the fact that there won’t be yet another Jurassic World movie this summer? Do you long for Saturday mornings sitting on the couch, eating Fruity Pebbles and watching Land of the Lost? Do you wish  you could ‘get it on, bang the gong, get it on‘ like T. Rex?

Well, have I got news for you. Severed Press has just released PREHISTORIC : A DINOSAUR ANTHOLOGY, a volume filled to the brim with wild and wicked dinosaur tales from scribes like Tim Waggoner, Jake Bible, Tim Curran and yours truly. 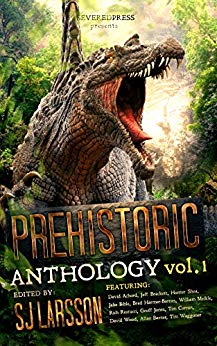 What’s in store for you dinosaur junkies?

PREHISTORIC is an action packed collection of stories featuring terrifying creatures that once ruled the Earth. Lost worlds where T-Rex and Velociraptors still roam and man is now on the menu. Laboratories at the forefront of cloning technology experiment with dinosaurs they do not understand or are able to contain. The deepest parts of the ocean where Megalodon, the largest and most ferocious predator to have ever existed is stalking new prey. Plus many more thrillers filled with extinct prehistoric monsters written by some of the best creature feature authors this side of the Jurassic period.

My particular story is called CULT OF THE CRETACEOUS and involves a death cult on a remote island, mysterious soldiers of fortune and some bad ass dinosaurs. I may have gone a little nuts.

It’s out in ebook now with trade paperback to follow shortly. Come and get your fix!

One response to “Dino(mite) Summer – Release of PREHISTORIC : A DINOSAUR ANTHOLOGY”