Notes from the Underworld : Horrorfind 2012

I think the best way to talk about this past Horrorfind Weekend is to roll with the random thoughts and pictures. So, here’s what’s dripping out of the old brain pan, 24 hours after we departed our little horror shangri-la.

Attendance wasn’t as, shall we say, robust as it has been in the past. However, that doesn’t mean there wasn’t a lot going on. This was my first time at Horrorfind as a guest. I was at the Samhain horror table with 7 other talented authors. All of them were as nice as can be (not evil, devil worshipping sex maniacs like people think horror writers are) and it made me realize I’m in some stellar company. Big time twisted love to Brian Moreland, Ron Malfi, Mick Ridgewell, John Everson, Damien Walters Grintalis, David Bernstein and Russell James. You don’t need to be a psychic to know the future of horror is right here at Samhain. 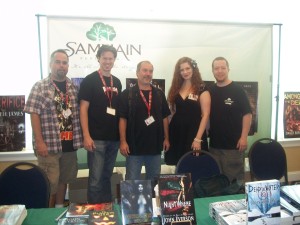 And I can’t forget the Samhain staff, including Don (our amazing editor), Dawn and Jacob, he of the mighty kilt (though he is wearing jeans in this pic)! 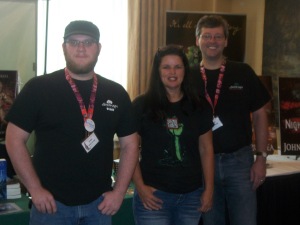 As the fates would have it, my hotel room was right next to actress Meg Foster’s (the actress with the amazing crystal blue eyes of They Live fame, not to mention about 100 other movies and TV shows). We got to talking about ghosts and meditation, hugged, and even exchanged a copy of Forest of Shadows for a signed picture. She’s a fascinating, caring woman. What I wouldn’t give to go back in time and tell the teenage me that I would one day meet her and hand her my book that she said would be her plane read. Teen Hunter would have said, “Yeah right, hammer. Keep dreaming.”

I was in the bar with author Norman Prentiss and saw an old dude walk by. I said, “That guy looks like Rob Halford.” Norman corrected me. “That’s Pinhead!”

I watched Dee Wallace hold court one night, sitting with a few other celebs while a ring of onlookers gaped at them. Dee and the gang were just having some drinks, but it was like they were on a little stage. Not wanting to be part of the rubberneckers, I trained my attention on the scraggly guy singing karaoke tunes from Rocky Horror Picture Show. Disturbing.

Actress Kim Darby (Don’t Be Afraid of the Dark, True Grit) was also near my room and I happily led her down to show her where the celebrity room was. She’s a kind and seemingly fragile woman. For some reason, I kept checking on her to make sure she was having a good time.

We met the cast of Pet Sematary, with the exception of Fred Gwynne, of course.

My favorite attendee was this little guy who walked around in dress pants and dress shirt, wearing a lucha libre mask and sometimes carrying a brain on a stick. Over 3 days, he never once took that mask off.

I also met a pretty cool guy who hand crafted an entire Ghost Busters costume. It was impressive to say the least. 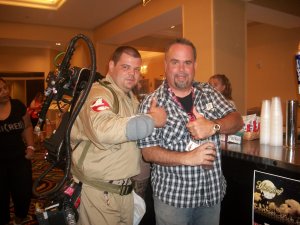 I rode the elevtor with Count Gore De Vol and we talked about what we had for dinner the previous night. The Count had yogurt for those keeping track. Wonder if it was blood flavored?

During my slot in the author reading room, I showed a Monster Men best -of episode and talked about ghosts. That was fun and I kept people awake, which is always a good sign.

For lunch one day, I had a hot dog that looked like a cooked baby arm. Not by intention. As someone said to me, a hot dog that big had to be filled with lots of snouts and assholes.

My wife bought me a skull for my writing area. Here I am showing my appreciation. 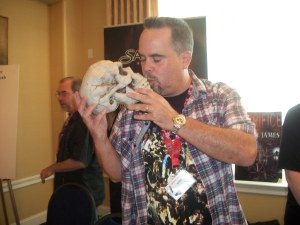 On the last night, all of the Samhainers went out to dinner in Gettysburg. It’s amazing to see how all of the history has been put aside so they can stress the paranormal. The sidewalks were even painted with little ghosts. Ghosts sell. We did see a bunch of Civil War re-enactors having dinner outside an old tent. Keeping to tradition, they munched on McDonald’s.

Oh yeah, and I was signing copies of Evil Eternal and Forest of Shadows. Great weekend. I have 4 days to prepare for Horrorhound in Indy. Wonder what I’ll see there? 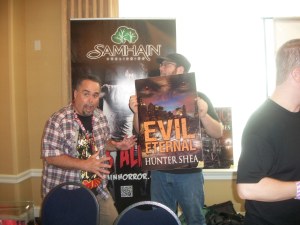 Beware the terror of Evil Eternal!

10 responses to “Notes from the Underworld : Horrorfind 2012”