I know this phrase has been used to death, but NightWhere is not for the faint of heart. If you’re a prude, run like hell in the other direction. This ain’t for you. 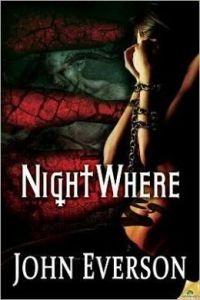 Rae and Mark are a happily married couple who have a little something going on the side. You see, Rae is an untamable woman, and no matter how much she loves Mark, well, I’ll be blunt, one dick just isn’t going to do it for her. And Mark, he’s a decent guy who loves his wife and will do anything he can to keep her. Plus he gets the side benefit of coupling with attractive women as they go from one swingers club to the next.

But Rae has an even darker side. The girl loves pain. Both giving it and receiving it in ways that’ll make you lose your lunch. Enter the mysterious club, NightWhere. In NightWhere, your darkest desires can come true. Wanna screw someone until they’re dead? Step right up. Does it turn you on to get flayed open like a fish? Well, we have a special room for you.

As Rae loses herself to her wonton and dangerous lust, Mark desperately tries to save her from the clutches of the club as well as her own damnation.

If one could truly glimpse hell within the pages of a book, this is it. The writing is crisp and fierce and totally unforgiving. You won’t be able to put it down, no matter how damaged your soul may be when you’re done.

5 responses to “Trying To Stay Alive in Club NightWhere”

Leave a Reply to Tim A Feely Cancel reply