I was lucky enough to spend some time with one of my favorite guys in the horror biz, Russell James. I’ve been hooked on his writing ever since I read his debut novel, Dark Inspiration. And lucky me, I get to hang out with the guy at horror cons! He has a lot going on this year, publishing enough fresh terror to keep his fans satisfied.

Your latest tale of terror, Dark Vengeance, was just released through Samhain Horror in March. What are readers in store for this time around?

Laura and Teresa, the heroes from DARK INSPIRATION, are back. A coven of witches has taken up residence in their small town in Tennessee. The coven’s plan is to resurrect an Aztec demon that really has it in for the male of the species. They need to perform a human sacrifice to make the demon’s transformation complete, and they will need to use children.

Laura and Teresa are the only ones with the clues a bout what evil is to come, but their experiences in DARK INSPIRATION were too much for their relationship to bear, and they’ve moved apart. They have to pull theirrelationship back together in time to save the children, includingTeresa’s son. 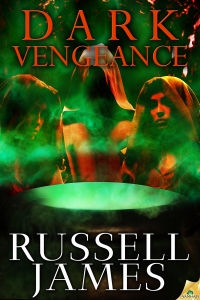 Your debut book. Dark Inspiration, just blew me away. I knewthat I was in great company with the new line of horror authors that Samhain had gathered. What made you decide to write the follow up, Dark Vengeance, and can we expect another in the ongoing saga?

I had readers of Dark Inspiration ask for more stories about Laura and Teresa, so I got to thinking about the effects on them from what they endured in the first book. I wanted that impact to follow through, toaffect them in the second story, not have it like sitcom episode where everything starts fresh. The new character in this book, who ends up being named Dawn, really intrigues me. We may hear more about her.

You also have a novella, Blood Red Roses coming out on May 6th (the day before my birthday in case anyone wants to buy me a cake). Tell us a little about it.

This novella is one of four that won the Gothic Horror Contest with Samhain. Mine is set on a cotton plantation during the Civil War. An orphan is sold there to work in the stable under an evil overseer, and uncovers a series of slave killings. The more he investigates it, the deeper and darker the story gets, until he finds himself a victim. I read a lot of Edgar Allen Poe ahead of time and tried to put a bit of his style into it to make it feel period-correct.

I’ve found a common theme with horror authors in that so many were inspired to pursue the genre by those 70s staples, In Search Of and Kolchak The Night Stalker. What are your favorite episodes of each?

In Search Of was just excellent. The episode explaining the Nazca drawings, the enormous etchings on the plains that can only be seen from above, made me convinced to this day we were visited by aliens. Kolchack? Was there a bad episode? Loved that show. And if anyone says Twilight Zone had no impact on them, they are lying.

I started a critique group with five other writers after we finished a Gotham Writing class. All of them have since gone on to be professionally published or to win writing awards, including several Honorable Mentions in Writers of the Future contests. We decided to self-publish a collection of time travel stories called OUT of TIME, and donate the royalties to Doctors Without Borders. It has sold over 5000 copies and generated a nice stream of checks for DWB. I think that having five other good writers deliver some no-holds-barred criticism forced all of us to write better, and it shows in the end product. It is even a hot seller in Great Britain for some reason.

We also just put out a fairy tale collection called In A LAND FAR AWAY, also supporting Doctors Without Borders.

In the horror realm, I have two collections of short stories, TALES FROM BEYOND and DEEPER INTO DARKNESS. I wanted to give readers an easy way to sample my style before they bought a novel. Both of these have done very well.

All of these collections are at Amazon, and listed on my Amazon author page.

As one of the privileged few to get an early look at your next novel, Dreamwalker, I’ve come to think of you as the Samhain Magic Man (cue the Heart soundtrack). You definitely have a deep interest in all things magical and mystical. What attracts you to magic?

It does appear I have a subconscious pull to power drawn from the supernatural. In DREAMWALKER, the characters use voodoo to access that power. That was some seriously creepy research that convinced me voodoo taps into something truly dark and powerful. In Haiti, voodoo was illegal at one point. Most governments don’t ban something that isn’t a real and present danger. If you ever want to get your family to second guess you, start checking voodoo books out of the library.

We’ve both had personal contacts with things beyond what we see as reality. There’s a whole different level out there we’ll someday understand.

What’s one thing you can tell people about yourself that you haven’t revealed in other interviews?

I went over twenty years without watching a horror movie. When I was about seven, my father took me to see Vincent Price in House of Wax in 3D. Between the 3D and the Technicolor melting faces, I was duck-down-in-the-seat terrified. Except for the 1930’s Universal classics, I didn’t see another horror movie until well into adulthood. Now they are a blast.

What was your path to publication like? If you could give aspiring writers one piece of advice, what would it be?

I lucked out. I was in that Gotham writing class I mentioned and the teacher said Samhain had opened up a new horror line under the respected editor Don D’Auria. I’d had two short stories published and DARK INSPIRATION’s manuscript was sitting on my hard drive awaiting the slew of rejections that my prior three manuscripts garnered. I figured I might as well start my rejections with one of the best, so I sent it off. I literally dropped to my knees in shock when I got the acceptance email. I honestly still didn’t believe it until the books showed up at my doorstep.

Advice to new writers? Write, read, submit. Just keep going. Writing is a skill. Some are gifted at it, but it is still a skill everyone must master. A gifted swimmer still has to train to win an Olympic medal. And that’s what getting published is like, like winning an Olympic medal. The more you write, the better you get. And if you are going to quit when you get rejected, don’t bother trying. I have five published novels, and I get rejections all the time. That part won’t get better.

Your future is as bright as a supernova. What’s next for the Magic Man?

Before the end of the year, I’ll be in two more benefit anthologies, a space/sci-fi one called CENTAURI STATION, and a second time travel collection called STILL OUT OF TIME. In January next year DREAMWALKER releases from Samhain. I just finished a post-apocalyptic novel manuscript called Q ISLAND, and have a few other cards up my sleeve after that. Don’t blink. You’ll miss something.