Ho-ho-ho and all that claptrap. I haven’t been posting much this month because I’ve been doing rounds of edits on my latest book for Samhain and working on a brand new novella. Because of this, I’m seriously behind with Christmas shopping, but I still have a week. Looks like I’ll be hanging out at the gift card rack at Walgreens.

I went out to dinner last night with my editor at Kensington, Gary Goldstein. Time spent with Gary is time spent well. The first thing he presented me with was the cover of my next thriller, TORTURES OF THE DAMNED. It comes out July 28, 2015. I know that seems like a long way off, but it’ll be here before you know it. This one is a unique look on a post-apocalyptic world. No zombies in this one. Nope. I opted for something much, much more terrifying. Gary and I channeled our inner Roger Corman for this one. What do you think of the cover? Subtle, right? 🙂 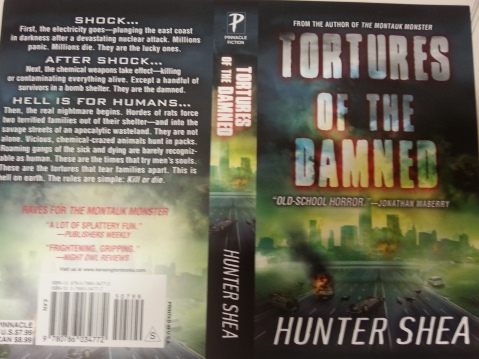 Here’s the back cover copy in case you can’t read it on the pic I took of it :

First, the electricity goes–plunging the east coast in darkness after a devastating nuclear attack. Millions panic. Millions die. They are the lucky ones.

Next, the chemical weapons take effect–killing or contaminating everything alive. Except a handful of survivors in a bomb shelter. They are the damned.

Hell Is For Humans

Then, the real nightmare begins. Hordes of rats force two terrified families out of their shelter–and into the savage streets of an apocalytic wasteland. They are not alone. Vicious, chemical-crazed animals hunt in packs. Dogs tear flesh, cats draw blood, horses crush bone. Roaming gangs of the sick and dying are barely recognizable as human. These are the times that try men’s souls. These are the tortures that tear families apart. This is hell on earth. The rules are simple: Kill or die.

The novels of Hunter Shea are:

“A lot of splattery fun.”–Publishers Weekly

13 responses to “New Cover Reveal – TORTURES OF THE DAMNED”