Meeting The Creature From The Black Lagoon at CT Horrorfest

Hellions, this man’s dream has come true! As most of you know, I LOVE The Creature From the Black Lagoon. I was lucky enough to meet Julia Adams at Chiller Theatre a couple of years ago. Her signed picture is the centerpiece of my horror collection.

Well, thank to the amazing folks who run the CT Horrorfest that took place in Danbury, CT, I was able to meet the beast end of the beauty and the beast tale, Ricou Browning. He was the man who donned the heavy suit for all three Creature films (and yes, there are 3 of them!). Ricou Browning is the last surviving Universal Monster, a living legend, the final tie to the greatest  period of monster making madness ever.

Me and my Lagoon homey.

This was one of the few times I was a stuttering fanboy, but I managed to garble my way through. I even stood up in the crowd later to ask him a question during the Q&A. And I didn’t break out in Nixonian flop sweat.

Which then leads to what a great little con CT Horrorfest is. I can’t believe as a New Yorker, I haven’t been there before. There were great vendors, a cupcake stand run by the people who won Rob Zombie’s Cupcake Wars, authors selling books (yes, there were people who wanted to buy books there. I can’t say that about all cons), celebs, cocktails, scares and more. It really was a blast and I plan to not only go there next year, but get a table as well.

If you’ve never been to a horror con, my only question is, what are you waiting for??? You can even bring  your non horror friend or spouse, because most cons also feature old time celebs from TV and music. You’ll meet fantastic, warm and friendly people (what my daughter and I call The Black Shirts, of which we are proud members), but also rare interactions with people you admired. Just off the top of my head, I’ve had amazing conversations that will last a lifetime with people like George Romero, Elvira, Meg Foster, Dawn Wells, Sid Haig, Doug Bradley (Pinhead), Dee Wallace, Ken Foree, Kevin Van Hentenryck (Basket Case), Barbara Crampton, the cast of Good Times and so many more. At one con, my family even walked Kristy Swanson (Buffy the Vampire Slayer) through the process of setting up her table because she’d never done a con before. To thank us, she gave my daughters a signed wooden stake!

So if you live in the NY tri-state area, do yourself a favor and buy a ticket to the fest next year. And as I always do with cons, I’ll let the pictures below speak for themselves. See you all at Chiller Theatre next month!

Poor woman was left at the altar…to rot! 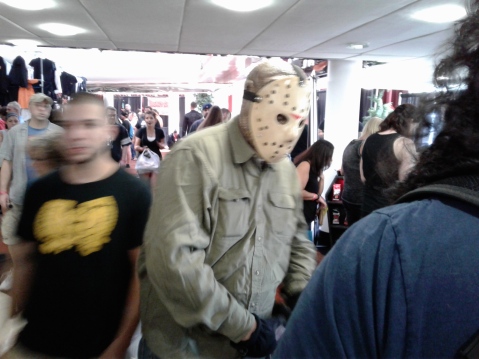 You can’t have a horror con without at least 1 Jason. It’s a federal law.

Ivy Shea learns that Christmas is not going to be so sweet this year.

I need to stop writing and make horror T-shirts. Busiest vendor of the day. 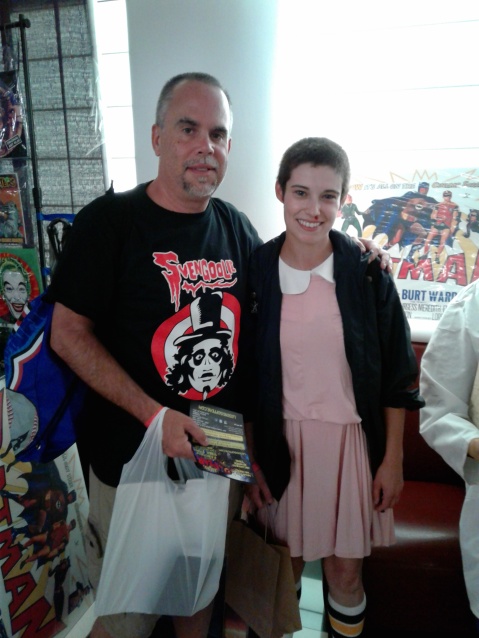 One of the ‘Stranger Things’ that happened that day.