Hear The Monster Roar – Audiobooks On The Rise

Despite early worries that e-books would force print to go the way of the woolly mammoth and Elvis, it appears the end is not nigh. In fact, in 2016, paperback sales were up over 5%, with e-books down over 20%. Independent bookstores even saw a healthy uptick in sales (and book hounds rejoiced!).

What isn’t getting all the press it deserves are the incredible gains in audiobook sales. The audiobook market is booming, with sales increasing over 30% in 2016. Business for audiobook sellers like Audible.com and iTunes is good. Damn good.

The big question is, why?

I’m going to take a stab at it. From my vantage point, everyone is plugged into some device or another like stasis pods in The Matrix. We’re going to have an entire civilization of hunchbacks from all that craning down to gaze into our phones. If someone isn’t looking down, odds are they’re sporting earplugs and listening to music or podcasts or audiobooks.

Back in the day, which really isn’t that long ago, when I went to the beach, I would look over a sea of people reading books, magazines and newspapers. The beach is a perfect place to kick back and relax, unplugging  yourself from the rat race. Now when I go, nearly everyone is locked onto their phones.

Audiobooks are a convenient way to read without having to – shudder – suffer from separation anxiety from our electronic devices. In a world where everyone likes to bemoan how busy they are, listening to a book during the commute to work or while shopping fits right in with their lifestyle.

Who has the time to sit and read anymore? In reality, everyone does, but we like to pretend our bouncing around like pinballs is so crucial to the survival of the planet, we refuse to sit still. Audiobooks are custom made for people on the go. I may read 100 books a year, but I also listen to a couple dozen audiobooks (in between the thousand podcasts I’m addicted to). 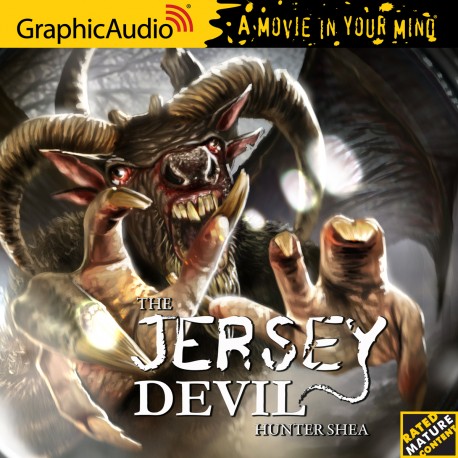 Production quality on audiobooks is advancing every year, with better narration and crisper recording. When GraphicAudio produced the audio for my book, The Montauk Monster, I was blown away by the end product. I didn’t know there were audiobooks like that. They call their audiobooks A Movie in Your Mind, and they are just that, with a large, talented cast, sound effects,  music and more.

GraphicAudio recently released my latest tale of monster mayhem, The Jersey Devil. I have to say, even as the man who wrote the words, hearing it acted out is creepy and downright terrifying. To be able to hear the Jersey Devil screech and its hapless victims cry out for mercy chilled my blood. It reminds me of listening to the rebroadcasts of the old radio serials with my dad when I was a kid. Productions like this are the way of the future for audiobooks, in my humble opinion. It’s impossible to get bored or have your mind wander when you’re fully immersed in the story. Go on over to GraphicAudio and listen to some of the samples and see for yourself.

How do you feel about audiobooks? What are some of your favorites? It looks like they’re here to stay, but if anyone tells you they’re going to wipe out print books, point them to last year’s e-book sales statistics.

2 responses to “Hear The Monster Roar – Audiobooks On The Rise”