A Dinosaur Adventure : MONSTERS IN THE CLOUDS by Russell James

I have a special treat this week. Russell James is one of the best horror writers around, and he’s joined the Severed Press family, penning some incredible adventure novels. His latest, MONSTERS IN THE CLOUDS, is chock full o’ dinosaur madness. Russell explains why we can’t get enough dinosaur fiction. Take it away buddy!

Dinosaurs. Who doesn’t love them?

It seems that every kid goes through a dinosaur phase. Not singing along with Barney, that purple monstrosity, but a fascination with the actual creatures that ruled the Earth a few hundred million years ago.

My obsession started when I was about eight years old. (I’ll let you know when it ends.) I drained the library of dinosaur books. I had the coolest 3D Viewmaster reels of dinosaurs locked in mortal combat. I watched the original King Kong movie a hundred times and always rooted for the T-Rex to beat the ape. A high point of that time was when my parents took me in to the American Museum of Natural History to see ACTUAL fossils. Coolest. Thing. Ever.

So after my novel Cavern of the Damned released, I needed a new adventure for the main character, Grant Coleman. Why not let him do what I’d always wanted to do, see real life dinosaurs? So I put him on a plane and sent him to Brazil, a beautiful country I’d visited twice. 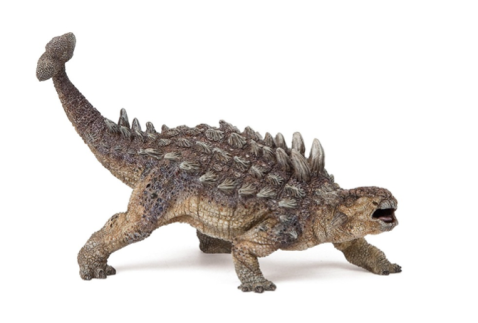 Grant gets to encounter an Ankylosaurus, a C list dino compared to the stars of Jurassic Park. I always loved this creature. Broad and squat, it had armor like an Abrams battle tank across its back and head. But that passive defense wasn’t enough, so it had a big bony club at the end of its tail. So while a predator futilely chomped at its back, it could knock the assailant unconscious with its tail. It was an herbivore, which isn’t that scary, so I switched it to carnivore and blamed evolution.

The isolated butte they explore also has pterosaurs, winged lizards with long, pointed heads. These were carnivores. A lot about this creature remains conjecture. Did it have feathers? Did it fly or glide? Did it walk or climb? I read all the research I could find and made them as terrifying as I could.

There are some other creatures they encounter, but I don’t want to spoil any surprises by detailing them here. But they are all based on real animals, and that fact may be scarier than any fiction I’ve spun.

So if you’re up for an adventure and a battle with untamed dinosaurs, Monsters in the Clouds will be just what you need. And it’s safe for family reading, no language, no sex, and monster-movie-type violence. I just realized I think that people being eaten by dinosaurs constitutes “family reading.” I may have issues.

Paleontologist Grant Coleman and activist Janaina Silva are recruited by Thana Katsoros for a top secret expedition, one in search of a live Apatosaurus on a plateau deep in the Amazonian rain forest.

But their plane crashes short of their destination, and the entire group faces a terrifying fight for survival. This isolated area hosts unknown animals more fearsome than they’d expected, including giant ants and flesh-eating pterosaurs.

Even worse, Katsoros’ agenda has more to it than meets the eye, and Grant soon fears that it doesn’t include all of them getting back alive. Will any expedition members survive to be rescued, or will they be devoured by the creatures indigenous peoples call the monsters in the clouds? 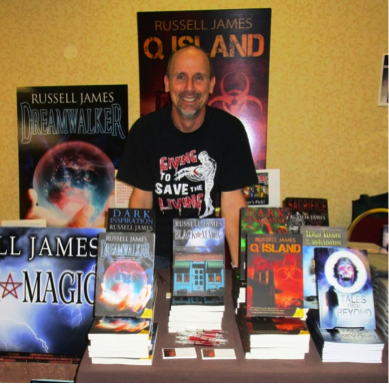 Russell R. James was raised on Long Island, New York and spent too much time watching Chiller, Kolchak: The Night Stalker, and Dark Shadows, despite his parents’ warnings. Bookshelves full of Stephen King and Edgar Allan Poe didn’t make things better. He graduated from Cornell University and the University of Central Florida.

After a tour flying helicopters with the U.S. Army, he now spins twisted tales best read in daylight. He has written the paranormal thrillers “Dark Inspiration”, “Sacrifice”, “Black Magic”, “Dark Vengeance”, “Dreamwalker”, and “Q Island”, the collections “Tales from Beyond”, “Deeper into Darkness”, “Outer Rim”, and “Forever Out of Time”.

Visit his website at http://www.russellrjames.com and read some free short stories.

4 responses to “A Dinosaur Adventure : MONSTERS IN THE CLOUDS by Russell James”