One For All The Vampire Lovers

Those of you who know me know I’m not a vampire guy. I leave that for my comrade in Monster Men arms, Jack Campisi. But when I was asked to write an essay about an offbeat vampire movie, I was actually excited. My initial thought was to wax poetic about The Hunger, starring David Bowie and Susan Sarandon. Alas, someone had already taken it. (By the way, some other vampire movies I dig are Rabid, Near Dark and Let The Right One In)

Luckily, no one had snagged my actual vamp favorite, The Vampire Lovers, starring the lovely Ingrid Pitt. I recently took my daughter to see it in 35MM at the Alamo and she loved it, too. Chip off the old beast. 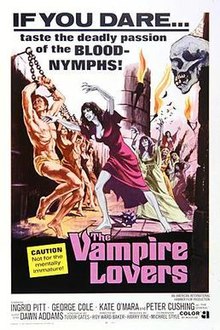 Well, if you’re a lover of vampires in cinema, you’ll definitely want to check out STRANGE BLOOD. 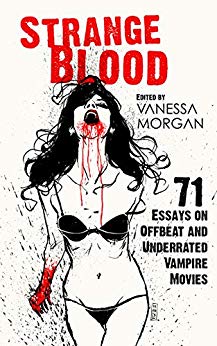 STRANGE BLOOD contains my ‘insightful’ essay on The Vampire Lovers and 70 other off the beaten track vampire flicks. Here’s a little on the book:

This is an overview of the most offbeat and underrated vampire movies spanning nine decades and 23 countries.

Strange Blood encompasses well-known hits as well as obscurities that differ from your standard fang fare by turning genre conventions on their head. Here, vampires come in the form of cars, pets, aliens, mechanical objects, gorillas, or floating heads. And when they do look like a demonic monster or an aristocratic Count or Countess, they break the mold in terms of imagery, style, or setting. Leading horror writers, filmmakers, actors, distributors, academics, and programmers present their favorite vampire films through in-depth essays, providing background information, analysis, and trivia regarding the various films. Some of these stories are hilarious, some are terrifying, some are touching, and some are just plain weird. Not all of these movies line up with the critical consensus, yet they have one thing in common: they are unlike anything you’ve ever seen in the world of vampires. Just when you thought that the children of the night had become a tired trope, it turns out they have quite a diverse inventory after all.

That synopsis have your blood running? Then pick up Strange Blood today!