You’re Never Too Old for Toys

The change in my household really hit home this Christmas when I realized that my wife and I didn’t need to go to a single toy store to get presents for our girls. They’re both officially teens now, and too cool for toys.

Which leaves me as the last child in the house. And you what the best part of being a man-child is? I get to buy any toy I want without asking for my parents’ permission. Nyah nyah!

Granted, I pick cool things up now under the auspices that they would make great set pieces for my Monster Men podcast. But really, let’s be honest, I’d buy this stuff even if I didn’t know what a podcast was.

I was with my brother-in-law Tom this weekend at Jay and Silent Bob’s Secret Stash. This is Kevin Smith’s awsome comic book store in Red Bank, NJ. On a side note, if you haven’t seen his movie Red State, you’re doing yourself a disservice. The movie has even sparked a wave of apocalypse hoaxes around the world.

Anyway, I digress like Gary Busey at a bris.

I was halfway into the store when I spotted my second favorite robot of all time.

You all remember Robbie the Robot? He made his debut in the great sci-fi flick, Forbidden Planet, and went on to do episodes of The Twilight Zone and Lost in Space. Robot from Lost in Space is my all time favorite. As a kid, I said if I ever made it rich, I would buy Robot and Robby and display them in my house. Still working on it. It was Robbie, it was a bobblehead, it was mine.

Then, tucked away in the back of the store was the action figure to beat all action figures. I’m not talking G.I. Joe with kung fu grip. It’s not an original Mego Captain America. No, I’m talking about the ultimate bionic Bigfoot! 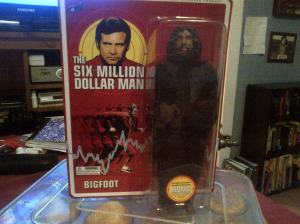 I nearly wept when I saw him. If you click on the picture above, you can watch Steve Austin go toe-to-toe with the robotic bigfoot created by aliens. And really, isn’t that the case for all Bigfoots?

11 responses to “You’re Never Too Old for Toys”