World War Z – Helping Us Catch Up On Our Z’s

In the spirit of full disclosure, I have to admit that I was one of the few people who didn’t particularly like Max Brooks’ breakout novel, World War Z. Like I hope that I’ve made it impossible for my wife to find other men to measure up to me, just about everything in the zombie pantheon has fallen shy of the original Dawn of the Dead for me. Everything that was right with DOTD was wrong with WWZ. More on that in a moment.

I’d heard that there were all kinds of productions issues with WWZ and if memory serves correct, this should have come out a lot sooner. Sometimes strife on a move set leads to greatness, like Predator (a movie that was said to have more issues than a NYC newsstand). But most times, chaos behind the scenes transforms into chaos on the screen. It’s very easy to see that WWZ had a lot of bad shit go down between the star and producer, Brad Pitt, and everyone else connected with the film.

I’m going to summarize WWZ quite easily. It’s a series of chase scenes that carry Brad Pitt from the US, to Africa, Israel and Wales. Brad goes somewhere, soulless zombies appear, Brad runs. He survives so many impossible situations, I was beginning to think he was Daffy Duck. And for a guy who was in 90% of the scenes, he said about 20 words.

It was like watching a 2 hour car chase, which gets very boring after a while. Unlike Dawn of the Dead, there are no real personalities here, either on the  living or the dead side. There’s no one to connect to here. At one point, I was rooting for an asteroid to slam the earth and put everyone out of their misery. Like the zombies, the script has no pulse, no heart, nada. 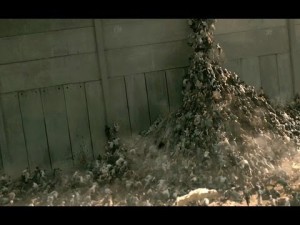 The only cool part, for me, was the way the zombies, perhaps the fastest and angriest since 28 Weeks Later, piled atop one another to scale any height just to get at human flesh. So, I got two scenes that raised my adrenaline level up a tick, and then I was rocked to sleep until the end credits.

And here’s something else that blew my mind – here we are with a zombie flick on an epic scale and there is almost no blood, certainly no gore! What the hell? Was this intentionally made for grade school kids?

Guess I’ll have to wait for the new season of The Walking Dead to get a real zombies fix, and that’s a show I think we’ll look back at and try to pinpoint exactly where in season 3 it jumped the shark.

Anyone else plunk down their hard earned cash for World War Z? Feel free to tell me I’m a small minded elitist a-hole or that you agree with me. I can take it. 🙂