High Noon with the Dust Devils – An Interview With Jonathan Janz

Jonathan Janz is one of the nicest guys you’ll ever meet. If you’ve never read his books, you might assume the mind behind the man is as unassuming as a Norman Rockwell painting. Thankfully, you’d be wrong. Dead wrong. This is a man who knows how to spin a twisted, pulse-pounding yarn. He’s been one busy dude since making his Samhain Horror debut a couple of years ago.

I’m both thrilled and honored to interview the man who conjures some of the finest books in the genre. His latest, Dust Devils, is a terrifying tale of Vampires in the old west. Grab a stake, crucifix and some garlic and read on, my children of the night….

Speaking as a fellow author who was writing his own western horror the same time as you, what made you decide to set Dust Devils in the old, wild west?

I think—at least at this point in my career—I view most stories through a pretty dark lens. So basically, since I was already a huge fan of western books and films, and I’d been reading a ton of westerns in the past few years, the seeds of the tale began to germinate as those two elements fused together (my dark lens and my western love). Like with most stories, the genesis of Dust Devils was very natural and organic; it was just sort of there in my mind. I wrote the first version of the opening scene maybe six years ago, and then I didn’t do anything with it. But as it is with the best ideas (I’ve heard Stephen King speak about this), the scene stuck with me. Eventually, the characters formed in my mind, and the tale was too powerful to ignore anymore. And Dust Devils was born. 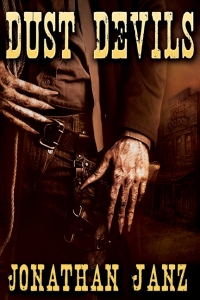 Knowing you, the vampires in Dust Devils don’t sparkle. How would you best describe your horrific creations and the new twist they give to vampire lore.

In their ferocity, they’re every bit as monstrous as the creatures in 30 Days of Night, so that’s a pretty decent starting place for a modern reader. But the best analogue to my vampires—in fact, the main inspiration for my vampires—is the original Fright Night movie. Chris Sarandon as the lead vampire Jerry Dandridge really terrified me as a child. But he was also the kind of guy you’d want to be friends with (if you didn’t know about his vampirism), or in the case of a woman, he was probably the kind of guy a woman would find attractive and seductive. And those two sides—the bestial and the seductive—weren’t at all mutually exclusive in that character. In fact, one kind of relied on the other for survival. Adam Price, my main vampire, isn’t exactly like Jerry Dandridge, but he’s pretty closely related to him, which shows how impactful Fright Night and Sarandon’s performance were on me.

Do you see western horror as an up-and-coming sub-genre, now that we’ve seemingly exhausted the whole zombie thing?

I do. I think horror can coalesce with the western as well as any other genre (including action and/or romance). In fact, I think the western works best when it’s an amalgam of all the aforementioned genres. The western is such an amazing kind of story, yet it’s really been marginalized for the better part of what, four decades? I think horror novels can help revive the western, and I think the western can help legitimize horror in the minds of many readers who tend to smirk or scoff at horror. But the fact is, in many ways, western stories and horror stories are kindred spirits. They’re both morality tales that stare unflinchingly into the abyss of man’s tendency to do evil, as well as man’s ability to behave nobly.

As for the second part of your question, I agree that zombies as a subgenre have been used a great deal in the past decade and that most of the traditional zombie treatments seem a bit tired at this point. But what I also see—and I’m really excited about this—is that zombies have begun to permeate the realms of horror previously uninfluenced by zombies. And this is a really good thing. I love zombie stories, but I’ve never written a zombie book. However, if you look at my last two novels—both Savage Species and Dust Devils—the creatures in both of those books are influenced by zombies and have zombie-like traits. In Savage Species, the “Children” are firmly entrenched in the tradition of the Wendigo, yet they can return from the dead and are hungry for human flesh. In Dust Devils, a crossbow plays a major role (a nod to Daryl Dixon/Norman Reedus in The Walking Dead), you have a cuckolded husband at the forefront (a Rick Grimes/Andrew Lincoln connection), and a father/son relationship that’s tested in a war with seemingly implacable foes (Rick and Carl vs. the zombies). So even though my novels aren’t zombie novels, they owe a huge debt to the zombie films, books, and television shows I’ve absorbed. Brian Keene’s The Rising is another huge part of what I’ve been doing and thinking. And in that one you have a powerful father-son bond at the heart of the story, just like the father-son bonds at the heart of Dust Devils. 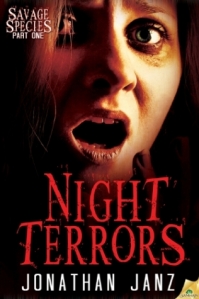 If you were living in the wild west, do you see yourself as a white hat or black hat? Or would you be a shade of gray, like Clint Eastwood’s character in Unforgiven? And what would be your cowboy name?

Clint Eastwood, absolutely. The white hats and black hats aren’t as interesting as the grays, because I think most of us, when you get down to it, are a bit gray. At least I am. Would I hurt an innocent person for any reason? No way. But would I bat an eyelash in defending my wife or my children? Would I be willing to fight fire with fire if need be? I’d like to think I would be. And I think many people would be as well. Now, that sounds good, but what about those situations in which there is no easy or obviously right path? Cody Wilson, my protagonist, finds himself in situations like that in Dust Devils. Does he kill a bad person to save himself even though the bad person might not really deserve to die? Does Cody save his new girlfriend or his stepmother? And how does he make that decision? Those are gray situations, and I think Cody responds the way I would to most of them. And he’s definitely a gray guy—good down deep, but certainly not perfect. Light gray, maybe. Oh, and my cowboy name would be Jack Wilson, just like the father in Dust Devils. I love the name Jack. 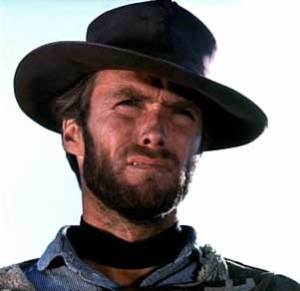 What would be your top 3 western movies and western novels?

Ooooh, that’s a great one. Here we go (I only cheated a little)…

OK, hypothetical, you’re called to a high noon shoot-out with a rogue cowboy vampire (who does some acting on the side). You have a holy water infused bullet with a crucifix carved on the side, so you know it will only take one shot to put him down. You see him an hour before the big event, his back turned to you. Do you draw on him and shoot him in the back?

If it means I’d save my wife or my kids? Absolutely. I guess that makes me a darker gray, but at least I’m honest. Now…if it would just be to save myself? Maybe. I mean, it would be tougher to live with, so I’d definitely have to pause and think. But in the end I think I’d still shoot him. Because he’s a vampire, and vampires kill. I’d be saving others, as well as myself, so I’d kill him and live with what guilt resulted.

Dust Devils is so unlike all of your previous books. Why don’t you tell everyone why they need to read it.

It is different, Hunter; you’re right about that. But maybe more than I ever have in a book, I show my heart in this one. I reveal some of my deeper fears, as well as some of my deepest longings. I mean, on the surface, the tale is a tense thriller with all the elements of great storytelling—strong dialogue, internal conflict, fierce action, life-or-death stakes, romance, friendship, and deep familial bonds. But it also contains a man with many regrets, a severed father-son relationship, a woman who’s been abused and who longs for something better. There’s a very powerful heart in this book that I think readers will respond to. But as I said earlier, there’s also a fast pace and an electricity that’ll sweep the reader along. The three major action set pieces in the story (the opening scene in the valley, the bloodbath in the saloon, and the final shootout/fight at the ranch) offer more action than you’ll find in almost any western I can think of. So I think it’s a crowd-pleaser that’ll stick with audiences long after they’ve read it.

What’s next for you, since I assume you never sleep.

Well, if all goes as planned, I’ll have both a novel (my first-ever sequel, Castle of Sorrows) and an unannounced novella coming this summer. In January of 2015, I’ll have The Nightmare Girl, a Joe R. Lansdale-influenced suspense/horror novel that delves into the ancient Irish fire myths. This summer I plan on writing at least two novels, but I can’t talk about those yet for various reasons—I mean, I can talk to you about them, Hunter, but I can’t talk publicly about them.

Thank you so much for having me on your blog, my friend. You are without question one of my dearest friends in the business, and a writer whose work I love and deeply admire (even though it makes me jealous sometimes).

Your dudeness, you have nothing to be jealous about. 🙂