Even More Bigfoot Movies and Books

Some time ago I posted a slew of Bigfoot movies where you could settle down and get your squatch on. Well, it’s time for an update because there is no shortage of cryptid interest out there and a whole lot of fiction books about our hairy cousins…at least by marriage. Here are some of the books and movies I’ve devoured over the past couple of months.

Of the Sasquatch books I’ve read and downloaded lately, this has my favorite cover. And the story inside doesn’t disappoint. Yes, there are folks trapped in the woods being hunted down by one pissed off BF, but the plot twist at the end is a huge, sick payoff. Ty is a very good writer and obviously loves his subject. This one did win kudos for mentioning the big guy’s dong several times. One of the hornier squatches you’ll ever want to meet. I give it 3 1/2 out of 5 squatch prints.

OK, I know this seems like a strange one. It’s also proof that Bigfoot and I are somehow psychically connected. I was in the bookstore one day specifically to buy a couple of western novels. If you’ve read my book HELL HOLE, you know I dig a good western yarn. Amazingly, the first one I pick up concerns a logging company being driven out of the forest by what appears to be a Bigfoot. Well, I had to get it. I won’t give away whether there’s a cryptid or not stalking the woods, but damn this was fun. Gun slinging and searching for Sasquatch? Count me in. 4 out of 5 squatch prints.

I literally got this book because I liked saying the title – over and over again. Drove my kids crazy. Turns out this is a damn fine story about a man and his young son and the terrifying encounters they have with a posse of Skooks – which, of course, are squatches. There’s actually a generations-old agreement between the skooks and ‘chosen’ humans who live in relative peace, but sometimes lines are crossed. There is an attack at a cabin that actually left me breathless. Worth it for that scene alone. 4 out of 5 squatch prints.

Moving on to movies, I’ve found at least a dozen squatch flicks that have been made over the past 15 years. I’ve got a lot of squatching-watching to do! I started with this one on a cold morning with time to kill. For some reason, Bigfoot leads itself to found footage. Not sure why. This one has some kid bent on revenge because Bigfoot killed his daddy when they were on a hunting trip years earlier. The acting is what you’d expect. I’m not going to say to run out and see this one, but if it’s free and you have some downtime, check it out. There are parts by the end that are a bit creepy. 2 of 5 squatch prints. 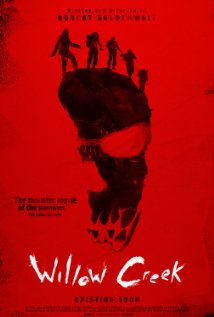 I have been dying to see this Bobcat Goldthwait movie ever since I heard about it well over a year ago. Again, found footage. But this time it’s done right. A couple goes to the site of the famous Patterson-Gimlin film to see if BF is still lurking about. There’s a slow build up with some genuine laughs. Of course, they’re warned not to go there, which they ignore. Once they settle into their tent for the night, things go ape shit. It’s just the camera trained on them reacting to the sounds outside. I was tense as hell – and I’m one jaded old horror fan. I dug it, and now I have to find a way to own it. 4 1/2 out of 5 squatch prints.

There are some more I have to sit my butt down to watch, including BIGFOOT WARS, EXISTS (which some are saying is the gold standard for all Bigfoot films) and FEAR THE FOREST.

Do you have any Bigfoot gems I may have missed? Share it with the class. You never know. If I like it, I may just give you a reward.

13 responses to “Even More Bigfoot Movies and Books”