An Interview With Ron Malfi About His Latest Horror Masterpiece, LITTLE GIRLS

I know it’s only August, but I’m locking in my vote for best horror novel of the year – Ron Malfi‘s haunting tale, LITTLE GIRLS. I’ve been telling anyone who will listen (that number increases when I’m not frothing at the mouth) that if they read one scary book in 2015, this is the one.

The fact that Ron and I are authorly blood brothers, sharing two publishers, should actually work against this. I know the dude. He’s a Tasmanian Devil of nuttiness and talent. Sometimes, the more you know someone, the harder it is to be sucked into their story, separating the man or woman from the tale of terror. Not so with Little Girls. From the first chapter, I knew I was walking wondrous paths carved out by writers like Peter Straub and Stephen King. It’s that good.

You can follow his blog tour by visiting Hook of a Book publicity. Erin has put together a hell of a tour.

So, as a special treat for me and you, I wrestled Ron to the ground long enough to ask him a few questions about his book, process and future plans. Pick up Little Girls right after reading the interview and you can thank me later. And if you see Ron at a con, don’t be alarmed when he shouts at you to buy a book or move on. 🙂

First, Little Girls was wonderful. As I was reading it, I was constantly reminded of books like Ghost Story, The Haunting of Hill House and Bag o Bones. What were your inspirations when it came time to sit down and write the book. Did you grow up next door to a demented girl?
You’re on the right track. Foremost in my mind was Straub’s novel JULIA, plus some of the other more paced, atmospheric horror books from around that time–Blatty’s THE EXORCIST, Levin’s ROSEMARY’S BABY, books like that. I’ve always loved the feel of those novels, they come across so natural and domestic and simple yet with this pulsing vein of pure horror running through them. Alas, I did not grow up next to a demented girl when I was younger, but the house around which the story is centered is based loosely on one in my current neighborhood, a spectacular brick structure set off one of the main roads and veiled behind trees, complete with the belvedere on the roof, just like in the novel. 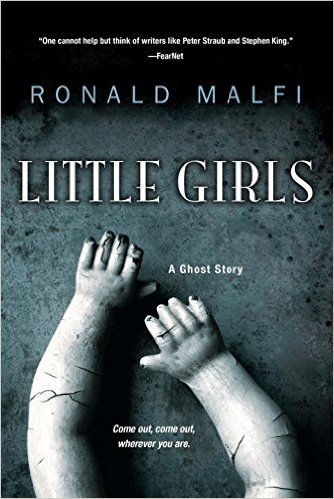 What’s the elevator pitch for Little Girls?
Young girl next door befriends Laurie’s daughter, and the girl is the spitting image of a child who used to torment Laurie when she was younger…a girl who died tragically.
In this day and age, it’s all about being loud and fast and grabbing the reader by the throat, which makes what you’ve done with Little Girls and The Floating Staircase so admirable. What we call quiet horror today was just called damn good story telling not so long ago. Do you find it more difficult to craft a tale and build tension in a ‘quiet horror’ novel? Were there moments when you were tempted to throw in a little madness?
Each story lives in its own world. I’m not against a more frenetic pace, to spill copious amounts of blood across the page–my novels SNOW and THE NARROWS have some pretty nasty little scenes–but other stories just don’t insist on that style, that treatment. LITTLE GIRLS is perhaps the “quietest” novel I’ve written to date, and I think, given the subject matter and the tone I was going for, it needed to be. For the most part, reader reviews of the novel have been very good, but there are always a handful of readers who will bemoan the slower pace of the novel, or perhaps not understand what I wanted to do with it. I’ll be the first to admit it–if you’re looking for blood and guts, over-the-top supernatural horror, scenes that will make you squirm and jump in your seat, this is not the book for you. You are not my audience for this book, if that’s what you’re looking for. I’m going for the long-term chilling effect, not the jump scare, in other words. Yet ironically, I think this is the darkest novel I’ve ever written, and the revelations at the end of the book, at least to me, are more gut-wrenching than anything gory or supernatural. It’s a quiet novel but it’s a terrible novel in its revelations, something that, in the hands of the right reader, will leave you with more than just a slight sense of discomfort.
When Ron Malfi sits down to write, what do we see in his corner of the house? Is there cigar smoke trailing to the ceiling, whiskey on ice, Madonna playing quietly in the background, dancing elves on the shelves?
Ha!  You know, my process has changed over the years, particularly after I’ve had kids. Used to be I’d wear my lucky “writing shirt,” sip Dewar’s scotch on ice, and listen to Springsteen on the CD player. I’d write like that for hours, coming up for air only when I was hungry or had to use the bathroom. Now, I lean more toward mugs of coffee instead of scotch, Dave Brubeck or Elmo Hope on the CD player instead of Springsteen (or maybe no music at all, depending on my mood). The walls of my writing office is lined, floor to ceiling, with books, so it’s fairly inspirational to glance up and look around and find yourself surrounded by countless brilliant authors.
How many publishers are you currently working with and what’s coming next? I ask because you and I share a couple and it would be nice to see if we could hit them all before we hang up our laptops.
At the moment, I’m under contract with Kensington for three books, the first of which is LITTLE GIRLS. Those are my only contractual obligations at this point. I’d had my eyes on Kensington for quite a while, and when I finished LITTLE GIRLS, I knew it would be a good book for them. They’ve got a strong horror and thriller line–as you know, having published a couple of books with them yourself–and I wanted to test out my work with them. I discussed this with my agent and she put me through to an editor there, who read the book and loved it. As for other current publishers, I work with Cemetery Dance, who publishes my limited hardcover editions–DECEMBER PARK was just released from CD in a stunning leather-bound edition and they’ll be releasing the limited edition of LITTLE GIRLS, too. I work with a handful of foreign publishers for the translations, too. I’ve published several novellas with DarkFuse, and will probably continue to do so in the future. I’m not under any specific contract with them, and will send Shane (the publisher) novellas from time to time, whenever I feel I’ve written something worthy of publication. There’s less pressure to produce that way, which means the stuff that I’m getting published through DarkFuse is, at least in my eyes, of high quality. As for what’s coming next, 2016 will see the publication of my novel THE NIGHT PARADE. It’s an end-of-the-world novel, which is something I never actively set out to write or ever thought I would, but at its heart, it’s really about the relationship between a father and his young daughter, who are on the run from the government for mysterious reasons. I’m very excited about it.

One response to “An Interview With Ron Malfi About His Latest Horror Masterpiece, LITTLE GIRLS”