THE DOVER DEMON Is Back!

Severed Press has just brought THE DOVER DEMON back to life. Originally published by Samhain Publishing in 2015, the book was left in limbo when Samhain closed its doors. This little beastie has returned with a kick ass new cover!

Back in 2014, I was at the International Cryptozoology Museum for a book signing on my tour for The Montauk Monster. The museum’s owner is Loren Coleman, one of the most revered cryptozoologists in the world. Loren and I struck up a conversation and I asked him what cryptid I should write about next. He didn’t hesitate in urging me to look into the famous Dover Demon case, one that still baffles everyone associated with it 40 years later.

Over the course of two nights in 1977 during spring break in the affluent town of Dover, Massachusetts, six teenagers spotted a bizarre, bipedal creature scuttling along the dark roads. It appears that all saw the very same being, one of them (Bill Bartlett) drawing a sketch of the anomaly for the police. 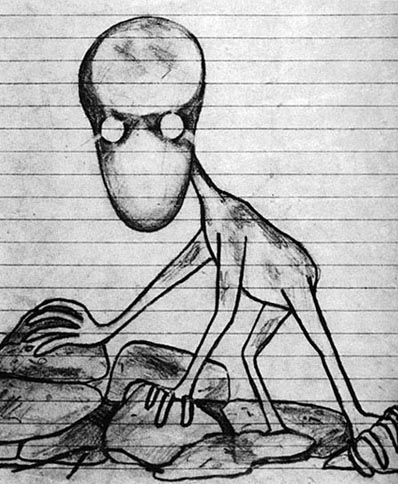 Today, a lot of people would say, “Oh, that’s one of those gray alien things.” But you have to remember, this creature was spotted before the iconic image of gray aliens was a thing. Hell, Close Encounters of the Third Kind hadn’t even come out yet. Loren Coleman was called to Dover and was the one to give it its name. Cryptozoologists are still puzzled by what the teenagers saw. They look at it in terms of being a terrestrial animal. UFOologists look to the case as an early example of the grays making themselves known.

A cryptid AND an alien? I couldn’t turn down the challenge. THE DOVER DEMON is both one of my most personal and strangest books to date. So, if you care to take a trip to Dover, the gates are once again open. Beware, you might never be the same!

A little bit of trivia : The man character is a man named Sam Brogna. I named him after a New York Mets short-lived first baseman, Rico Brogna. The man’s career was cut short due to injury, but he lives on in The Dover Demon. Well, sort of.

The Dover Demon is real…and it has returned.

In 1977, Sam Brogna and his friends came upon a terrifying, alien creature on a deserted country road. What they witnessed was so bizarre, so chilling, they swore their silence. But their lives were changed forever. Decades later, the town of Dover has been hit by a massive blizzard. Sam’s son, Nicky, is drawn to search for the infamous cryptid, only to disappear into the bowels of a secret underground lair. The Dover Demon is far deadlier than anyone could have believed. And there are many of them. Can Sam and his reunited friends rescue Nicky and battle a race of creatures so powerful, so sinister, that history itself has been shaped by their secretive presence?

7 responses to “THE DOVER DEMON Is Back!”