Talk about your pleasant surprises! Publishers Weekly just dropped a review for my upcoming Lyrical Underground novella, JURASSIC FLORIDA, and it looks like they dig it! Here’s the review :

The tiny town of Polo Springs, Fla., is the epicenter of this hilarious creature-feature gorefest from pulp horror maven Shea (The Jersey Devil). Eighteen-year-old Ann Hickok is the town’s mayor, and she’s got two problems: Hurricane Ramona is bearing down on Polo Springs, and the city is infested with tiny iguanas. When Ramona makes landfall, Ann learns that lurking beneath the ground are the giant lizards spawning all the little critters, and they’re about to unleash hell. Few of the 317 residents will be spared. Shea introduces a variety of characters, including a wayward New York City mobster, but readers shouldn’t get too attached to them. What the book lacks in plot, it more than makes up in twisted humor and campy horror. Those looking for a brain break and a bloody mess will revel in this promising series launch.

Folks at Lyrical Underground suggested I start making merch that says PULP HORROR MAVEN. Hmmmmm. I just love that the reviewer totally gets the vibe of the book. To say I’m thrilled about the PW review is the understatement of the year. This is the best start for my ONE SIZE EATS ALL series I could have asked for. If you’re looking for a fun beach read with lots of monster stomping fun, this is for you. 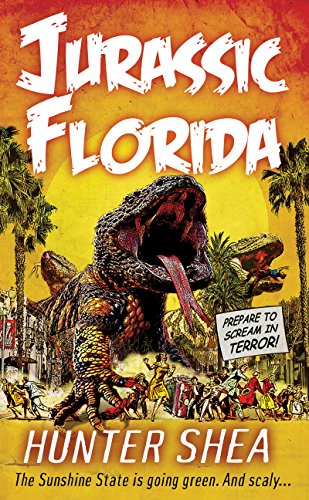 JURASSIC FLORIDA comes out on June 19th wherever ebooks are sold. You can pre-order your copy today by clicking here.