My new novel Curse of the Viper King is Grant Coleman’s latest adventure fighting (or maybe just surviving) giant monsters. In this story, he and a crew of loggers in the Amazon have to fight off giant spiders, among other things.

Spiders are naturally creepy. Furry, but not cute. Way too many legs. Fangs. We may love Spider-man, but we don’t love spiders, man. Fearing them even has its own name, arachnophobia. There’s no specific phobia for most other animals. 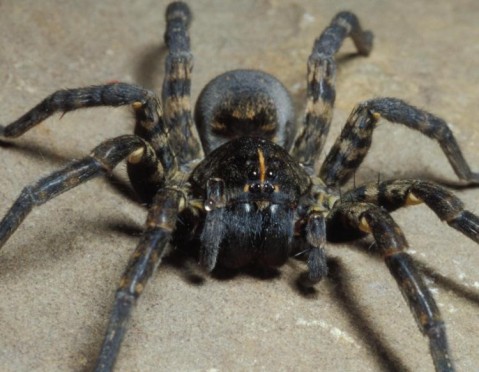 I didn’t have to spin too much fiction to come up with the spiders in this book. I just scaled up the real thing. They were scary enough.

Ground spiders are a set of species that do not spin conventional webs. They build web-lined burrows and shoot balls of immobilizing webbing at their prey. They have fewer, but much larger silk producing glands. So while most spiders are passive predators, waiting for prey to blunder into a web, ground spiders are active hunters, finding and felling prey.

And they are good at it. They are able to shoot silk with enough accuracy to hit legs and mouths of prey much larger than themselves. And this silk is sticky. The glue can withstand shear stresses that are more than 750 times what artificial glues can handle. Getting hit with this stuff is worse than being wrapped in a blanket of super glue.

And if that’s not chilling enough, the spider doesn’t eat the prey. It just sucks out all the fluid leaving a desiccated corpse behind. Do not volunteer to clean up after one of their dinner parties.

In Curse of the Viper King, Professor Grant Coleman and activist Janaina Silva are lost in the Amazon. They come across a logging team and hope they can hitch a ride home through them. But workers discover the remains of a giant snake that send them into a superstitious panic. Then that night, giant spiders arrive. The survivors of the attack find that their only hope for salvation lies in the lost Aztec temple of the infamous Viper King. But they have to get there and back alive.

So as your read about Grant’s harrowing exploits among the spiders, don’t give my imagination all the credit. This spider-induced terror plays out every day all over the world, just on a much smaller scale. Just be glad you aren’t a quarter-inch tall.

Russell James grew up on Long Island, New York and spent too much time watching late night horror. He graduated from Cornell University and the University of Central Florida. After flying helicopters with the U.S. Army, he now spins twisted tales, including paranormal thrillers Dark Inspiration, Sacrifice, Black Magic, Dark Vengeance, Dreamwalker, and Q Island. His Grant Coleman adventure series covers Cavern of the Damned, Monsters in the Clouds, and Curse of the Viper King. His wife reads his work, rolls her eyes, and says “There is something seriously wrong with you.”

2 responses to “A Little Arachnaphobia With Horror Master Russell James”